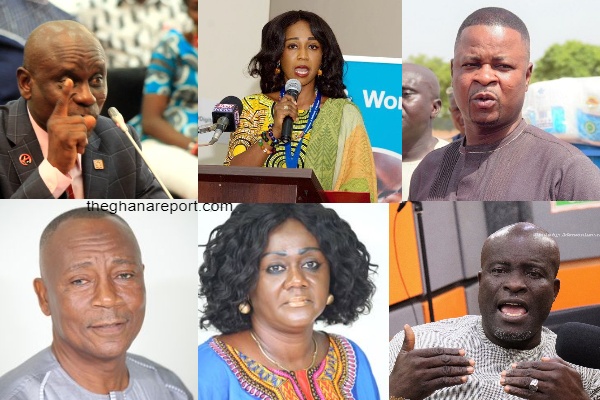 At least 21 ministers and deputy ministers in the Akufo-Addo administration have lost their bid to become or to remain Members of Parliament.

The pack includes eighteen incumbent MPs, five of whom are ministers, and fourteen are deputy ministers.

The tsunami of political losses swept through President Akufo-Addo’s 124-member executive, criticized as the largest ever in Ghana’s history.

Two others, the Upper East Regional Minister, Paulina Abayage, and Kofi Dzamesi, Minister for Chieftaincy who has been contesting the Ketu South parliamentary seat since 1996 without success was vanquished again.

Eight out of the 19 Ministers are from the Greater Accra Region and the Central Region where the main opposition National Democratic Congress unseated the Ministers.

Three are from the Upper East regions and two from the Western region. There was one apiece from the Volta, Upper West, and Oti regions.

Three  each from the Bono and Bono East Regions

In what appears to be a referendum on MPs who have to split time between their constituencies and their ministries portfolios, three other experienced hands; Boniface Abubakar Saddque, Joseph Dindiok Kpemka, and Derek Oduro have lost their seats.

The electorates appear to say ‘give us our seat and take your appointment’.

Not many expected such an incursion of losses in Akufo-Addo’s government.

The president should he win will be forced to look for another set of MPs to meet the constitutional requirement that stipulates that the majority of ministers must come from parliament.

In a ministry such as the Chieftaincy and Religious Affairs Ministry, none of the two political heads will be going to Parliament after the minister and his deputy both contested for seats in NDC strongholds.

Despite the losses, President Nana Akufo-Addo’s 17-member cabinet remains largely untouched as many triumphed in their respective parliamentary races.

The Tourism Minister, Barbara Oteng-Gyasi, is the only cabinet minister to have lost her seat. The Energy Minister, Peter John Amewu, on the other hand, is the cabinet minister who has now become an MP after a shocking victory in an NDC stronghold, Hohoe constituency of the Volta region.

The story is being updated…..