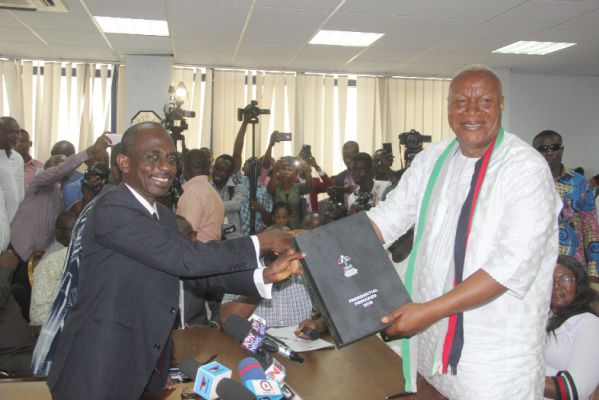 Four persons aspiring to lead the National Democratic Congress (NDC) into the 2020 elections yesterday filed their nominations ahead of the January 26, 2019 presidential primary.

The aspirants, who were accompanied by their teeming supporters, presented the completed forms to the National Executive Committee (NEC) of the party between 10 a.m. and 2:40 p.m. yesterday.

When the Daily Graphic got to the NDC Headquarters about 10 a.m. yesterday, the place was bustling with human activities, as supporters of the various aspirants had already gathered there to give moral support to the candidates.

It was a charged atmosphere as the supporters, who were clad in branded T-shirts of their preferred candidates, sang, danced and chanted slogans such as: “Prof. Alabi, this is your time”, “No Mahama, no victory 2020”, “Eye zu, eye Sly”.

The headquarters was more electrified when former President John Mahama got there.

The hundreds of party members who had gathered there were thrown into a state of ecstasy as they greeted and sang the “borborliborbor” song and shouted: “No JM, no vote”.

Mr Bagbin was the first aspirant to file his nomination at about 10:15 a.m.

When he arrived, some members of the NEC of the party, led by the National Chairman, Mr Samuel Ofosu Ampofo, were already prepared to receive the nomination forms.

About 10:40 a.m., the next aspirant, Professor Alabi, arrived with his team.

Key among the team were Ambassador Victor Gbeho; the Spokesperson for the team, Mr Ken Dzirasah, and the aspirant’s wife, Prof. Goski Alabi.

Those who accompanied former President Mahama to file his nomination included a former Chief of Staff, Mr Julius Debrah; an elder of the party, Prof. Kwamina Ahwoi, and the National Campaign Manager, Mr Ohene Agyekum.

Mr Mensah and his team were the last to file their nomination about 2:40 p.m.

All the aspirants presented their completed nomination forms, accompanied with banker’s drafts, to the party executive, who assured them that the documents would be properly perused before the vetting started in about four days.

Mr Asiedu Nketia, who received the documents, gave an assurance that clerical errors would not form the basis for the disqualification of any of the candidates.

He explained that the NEC would meet today (December 18) to constitute and inaugurate the vetting, election and appeals committees to ensure that processes leading to the election of the flag bearer were diligent, transparent and devoid of any rancour.

While assuring the aspirants that the executives of the party would put in place systems to ensure that there was a level playing field for all, Mr Ofosu Ampofo cautioned the candidates to stay away from the use of intemperate language in their campaigns.

“I want to state here that NEC will not countenance the use of social media in particular to destroy other people because it destroys the party. We will clamp down on any person who does that and hold the aspirants responsible for the actions of their team members,” he stressed.

Mr Ofosu Ampofo stressed that the NEC would ensure that no aspirant was given unfair advantage over the other.

Dispelling assertions that the executives were charging higher fees to favour a particular candidate, he stressed: “We will not put the party on sale to the highest bidder, although we need money to carry out our activities.”

The four aspirants pledged to run decent campaigns and play to the rules set by the party for the elections.

For instance, Mr Mahama called on the other aspirants to see the flag-bearer race as a contest of ideas that would help build the party, rather than antagonising themselves.

For his part, Prof. Alabi commended the Council of Elders for intervening when some of the aspirants petitioned the council for a reduction in the filing fee.

After touting his credentials, he said he was the appropriate person to lead the NDC to the 2020 elections because he had gathered enormous experience over the years.

Mr Mensah assured the rank and file of the party that his team would not flout the laid down rules and procedures during the campaign period.

He urged other aspirants to be generous enough to rally around the eventual winner in the name of party unity and forward march to victory in the next elections.

Mr Bagbin also assured the NEC and the entire party that his team would engage in a campaign that would be devoid of name calling and character assassination.

He said he would be guided by the principles and values of the party to ensure that the NDC regained its integrity.

From the Accra International Trade Fair Centre, our reporter, Victor Kwawukume, reports that former President Mahama addressed a press conference a few hours after he had filed his nomination at the party’s headquarters.

He said the period spent in opposition had given him the substance and adequate preparation to lead the NDC to victory in Election 2020.

“I’ve learned a great lesson… There are, indeed, lessons learnt from failure,” he said.

Mr Mahama, alluding to his 2016 loss, said in December 2016 he had faced the solemn task of conceding an election.

According to him, he faced the solemn task in sober acceptance of the verdict expressed by the good people of Ghana.

“At the end of an intense bruising contest, the people conferred the honour of their mandate on the New Patriotic Party (NPP) in earnest expectation that the incoming administration would make good on their numerous “one-a-day” campaign promises,” he said.

Mr Mahama said he respected the verdict of the people and appreciated it for its significance.

Continuing, he pointed out that “it was a hard thing to do, and it was a deeply humbling experience.

I was sincere in my hopes that the new government would be successful in the great undertaking that was before them”.

“I still am, but I was gutted by the missed opportunity to see through an agenda that I genuinely believe will address the most intractable fundamental problems that bely our nation’s chronic difficulties,” he said.