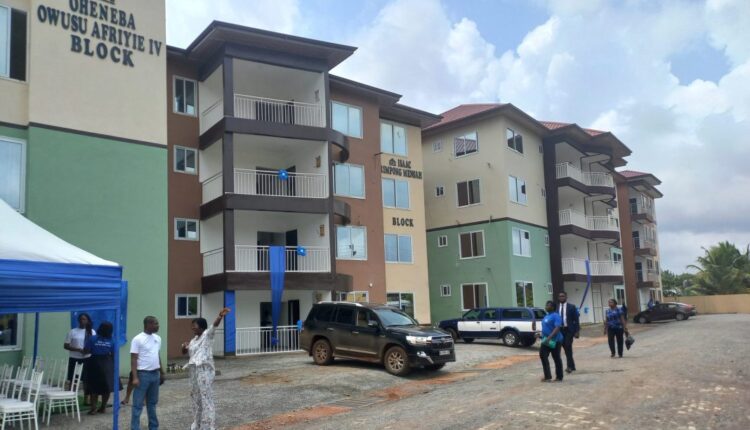 The apartment project, entailing respectively two to four bedrooms, was handed over to some public and civil servants.

The project is part of Government’s affordable housing initiative to address the country’s housing challenges.
In spite of an annual supply of 40,000 housing units, the Population and Housing Census conducted in 2021 revealed that the country’s housing deficit was still in excess of 1.7 million.

Mr Francis Asenso-Boakye, Minister of Works and Housing, who commissioned the project, said it was people’s desire to own homes, and for some, the basis of their tradition.

Therefore, he said, the Government was always proud to be associated with any activity associated to home ownership.
‘‘If you have a place to sleep at the end of the day’s hard work, then you can say that you are living a meaningful life,’’ the Minister said.

Mr Asenso-Boakye said the President was concerned about ordinary people having access to their own homes.
The Ministry, he said, recognised SHC as a strategic partner to provide mass affordable housing for people due to its presence in all the regions of the country, operating efficiently to support Government’s efforts in addressing its housing deficit.

The Minister said the Company’s story was one of the many success stories of the Government.

‘‘What we are witnessing today shows that SHC is on the right path and we are proud of them. I want to take this opportunity to commend the board and management of state housing and stuff for this particular edifice,’’ he said.
Mr Asenso-Boakye noted that, the Company needed adequate support to produce mass affordable housing, which is the vision of the President.

He said the Ministry had developed a framework which would subsidise and reduce housing cost to about 40 per cent, by providing free land and infrastructural services to private developers to make housing affordable and accessible.
Mr Kwabena Ampofo Appiah, Managing Director (MD), SHC, said the project which started in 2011, was abandoned and taken up again two years ago.

He said with the dedication of the staff, and investigations of their engineers, they were able to rectify the challenges associated with the land, and continued with the construction.

The MD urged the public to patronise the Company, irrespective of their status, since the houses were affordable with considerate terms of payment