About 503,000 Ghanaians are expected to vote in the 27 December referendum for the proposed Western North Region.

The poll will be conducted in about 1,000 polling stations created by the Electoral Commission (EC) within the enclave of the proposed new region.

The Western Regional Director of the EC, Stephen Opoku Mensah told Citi News that a special voting exercise will be organized on Monday, December 24 for some electoral officials, journalists and security personnel to allow them to offer uninterrupted services on the referendum day.

Nine out of the 23 constituencies of the Western Region, namely Bia West and East, Juaboso, Bodi, Bibiani-Anhwiaso-Bekwai, Sefwi-Wiawso, Akontombra, Suaman and Aowin, which are local assemblies, will form the proposed Western North region if the required threshold of votes is attained in the December 27 referendum.

“The Western Regional Director of the Electoral Commission, Stephen Opoku Mensah who is to supervise the referendum explained that ‘‘as at the time of voter exhibition, the nine constituencies of the proposed Western North had 503 thousand total registered voters. This means at least 50 percent of these registered voters representing 252 thousand must cast their vote on the day, and then the yes votes must be 80 percent of the 50 or more votes cast for the new region to be carved out of the Western Region.”

Mr. Opoku Mensah said the EC is ready to ensure a smooth electoral process as all materials and devices for the process have been distributed to the concerned areas.

Meanwhile, hundreds of residents from the proposed Western North Regional Secretariat, led by its Coordinator, Lieutenant Colonel Anthony Aduhene (Rtd.), have embarked on a health walk at Sefwi-Wiawso to encourage more people to vote YES for a breakaway from the existing Western Region.

He told Citi News that “as part of activities towards the referendum, we deemed it fit to organize a health walk to motivate the people, encourage and to ginger them to come out to vote on that day.

Lieutenant Colonel Aduhene who described the referendum day as a special day for the people of the Western North said they anticipate a perfect score from the referendum. 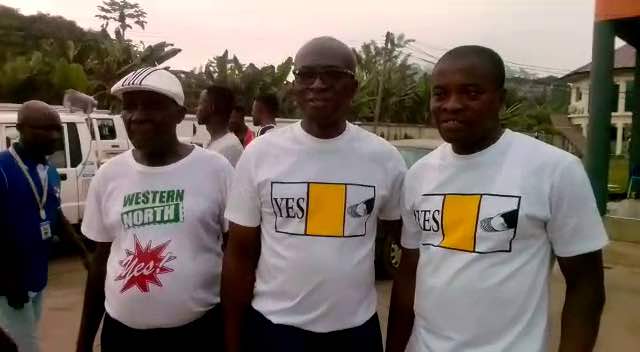 The Western North area of the Western Region is the largest cocoa producing area in Ghana but deprived of development and the people feel their long distance from Sekondi-Takoradi is not helping their progress, hence their determination to be legally recognized as a new region.