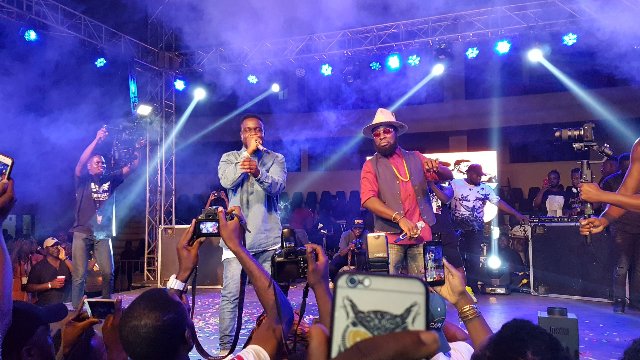 Photos: Sarkodie and M.anifest perform together on stage

Two of Ghana’s fiercest rappers – Sarkodie and M.anifest – surprised many when they performed together on stage Sunday night.

It was one of the rarest, if not the first time, the two acts will be seen together on stage performing together.

During M.anifest’s Manifestivities 2018 concert Sunday night at the Bukom Boxing Arena, Sarkodie, who was not billed to perform, made a surprise appearance.

As M.anifest was about to perform his controversial e‘godMC’ track, he paused and said, “Charly, we have to progress and move forward as a people…can’t we do that?….let’s move forward…”

Sarkodie was ushered onto the stage with his popular ‘Original’ song. The venue erupted into loud cheers as he joined M.anifest, shook hands and also do the iconic dance to the song.

During a brief hilarious interaction on stage, Sarkodie said M.anifest was about to diss him again because he was about to perform ‘godMC’.

When M.anifest asked his mission, Sarkodie said when he said M.anifest was about to perform the ‘godMC’, he quickly rushed from home to the venue.

He thrilled patrons to some of his sit songs including, ‘Can’t Let You Go’ which saw actress Joselyn Dumas walk onto the stage to show off her dancing skills.

Sarkodie performing on stage with M.anifest is very significant considering the history between them.

M.anifest and Sarkodie were embroiled in one of the biggest rap beefs the country has ever witnessed.

In 2016, M.anifest, in his ‘godMC’ track, took digs at Sarkodie after he released his “Bossy” song. Sarkodie also quickly replied to M.anifest in his “Kanta” track.

Their beef songs trended on social media for several weeks and generated a lot of public debate.

On Friday, like an eclipse, a meeting between the two got heads turning when the two shook hands in public at the car park of Joy FM.

The 2018 edition of the Manifestivities: The GMT Live Experience, apart from M.anifest and Sarkodie, also witnessed performances from Nigeria’s Burna Boy and Simi, and some Ghanaians acts including Kwesi Arthur.