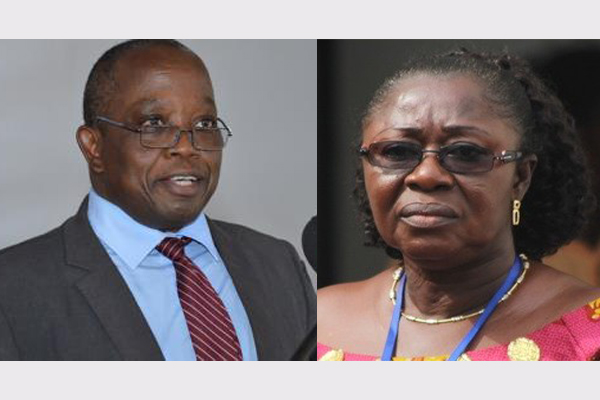 The Auditor-General, Daniel Yaw Domelevo, has turned down a request by the Chief of Staff, Akosua Frema Osei-Opare, for an audit verification for the payment of arrears to legislators of the Fourth Parliament of the Fourth Republic. 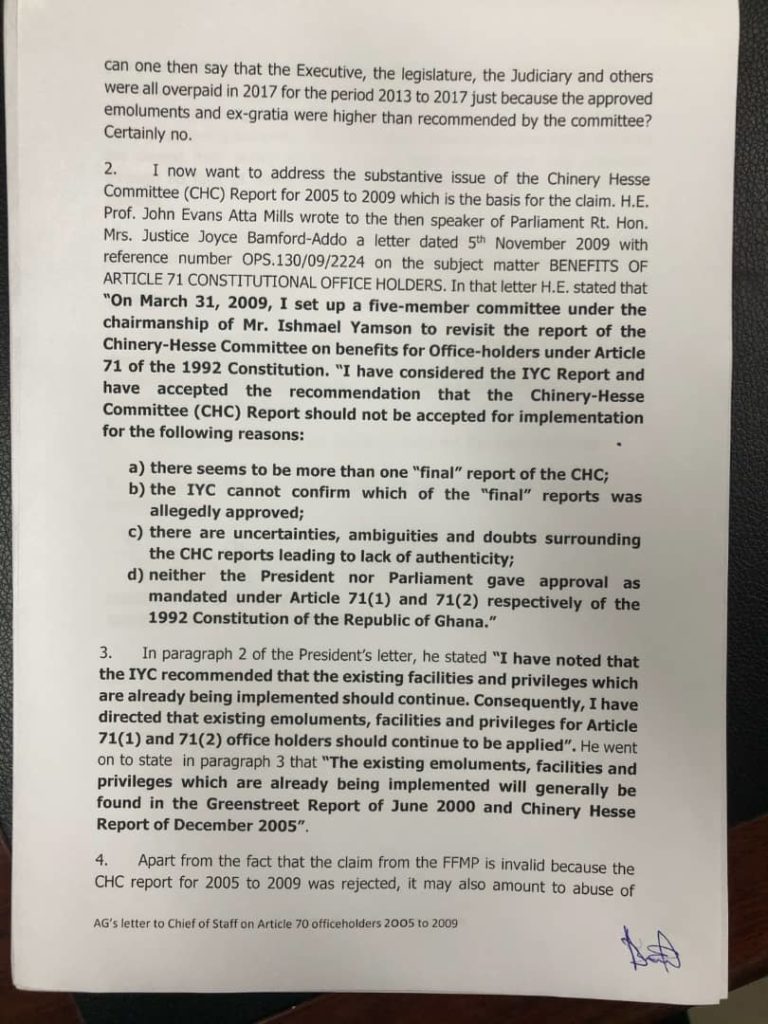 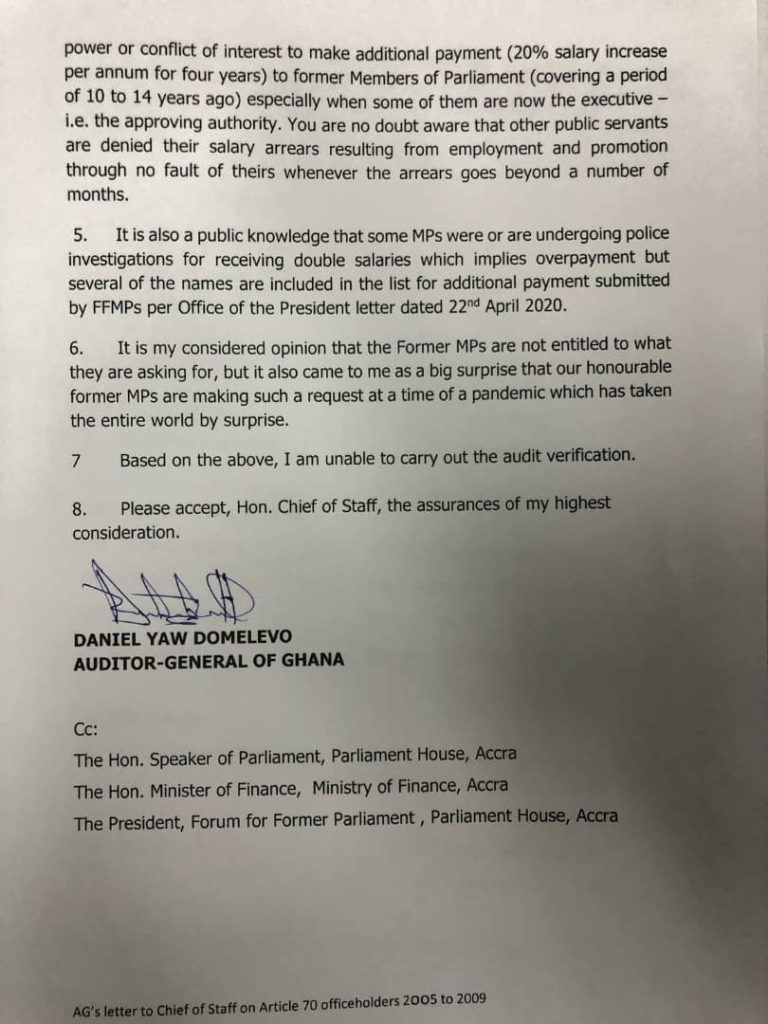 Ms Osei-Opare made the demand in a letter dated April 22, 2020, based on a petition by a group of more than 130 people forming the Forum for Former Members of Parliament (FFMP). 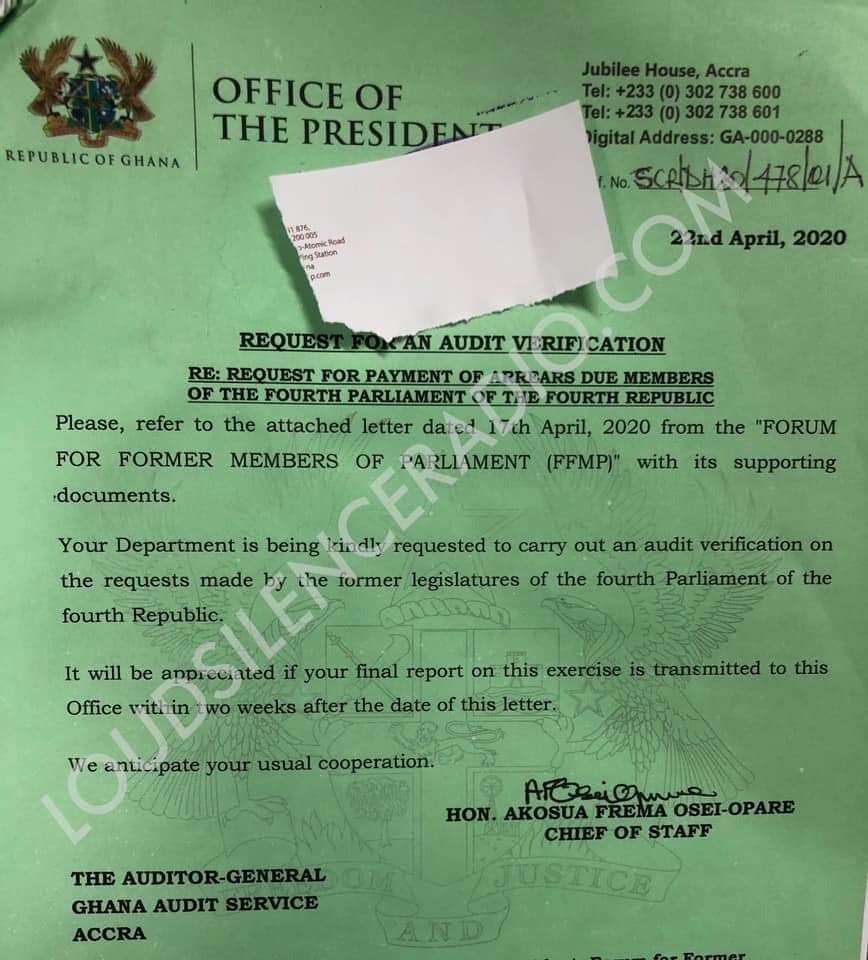 The group had written to Ms Osei-Opare in a letter dated April 17, 2020. They had attached documents demanding some arrears in salary, gratuities and other emoluments spelt out for Article 71 holders who served between 2005 and 2008.

Ms Osei-Opare herself was also listed among the ex-MPs requesting for the payments after serving as MP for the Ayawaso West Wuogon Constituency with the period. 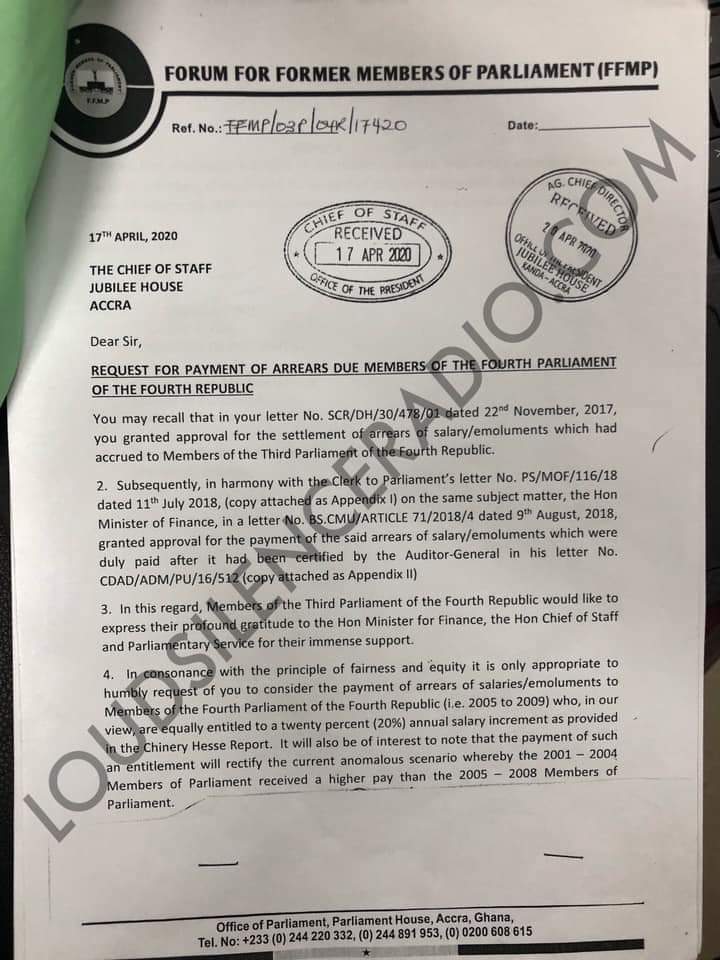 The payments were to the tune of 80% salary increment for four years in addition to other arrears amounting to GHC 29.7 million  in total for all the persons involved.

However, the Auditor-General stated in response on May 8, 2020, that the request was not valid because the arguments were based on the Chinery Hesse Committee instead of a Presidential directive.

Various presidents have constituted various committees to examine what is due to Article 71 holders after every four-year tenure.

Unsatisfied with the recommendations of the Chinery Hesse Committee, the late Professor John Evans Atta Mills constituted the Ishmael Yamson Committee in 2009 to review the former.

In his letter, Mr Domelevo stated that the report of the Chinery Hesse Committee was rejected, hence the premise on which the FFMP were making the claims were baseless.

Additionally, he pointed out that “it may also amount to an abuse of power or conflict of interest to make additional payment…to former Members of Parliament (covering a period of 10 to 14 years ago) especially when some of them are now the executive – that is- the approving authority.”

The Auditor-General further drew the attention of Ms Osei-Opare to the ongoing investigations of alleged salary overpayments made to some FFMP members who are also legislators in the current Parliament.

For him, the ex-MPs “are not entitled to what they are asking.”

The Auditor-General questioned why the group would be making such demands at a time the country was battling the deadly coronavirus which has infected 5,735 people with 1, 754 recoveries and 29 deaths. The contagion has crippled various sectors with a significant revenue shortfall for the government.

Besides the ex-MPs, the names of several other Article 71 officeholders were attached to the petition of the FFMP.

They included former President John Agyekum Kufour; President Nana Akufo-Addo, who served as a minister and MP for Akim Abuakwa South; businessman and founder of the Progressive People’s Party (PPP), Dr Papa Kwesi Nduom, who served as MP for Komenda-Edina-Eguafo-Abirem constituency and a cabinet minister under the Kufour regime; and Senior Minister Yaw Osafo-Maafo, Ayawaso West Wuogon among others. 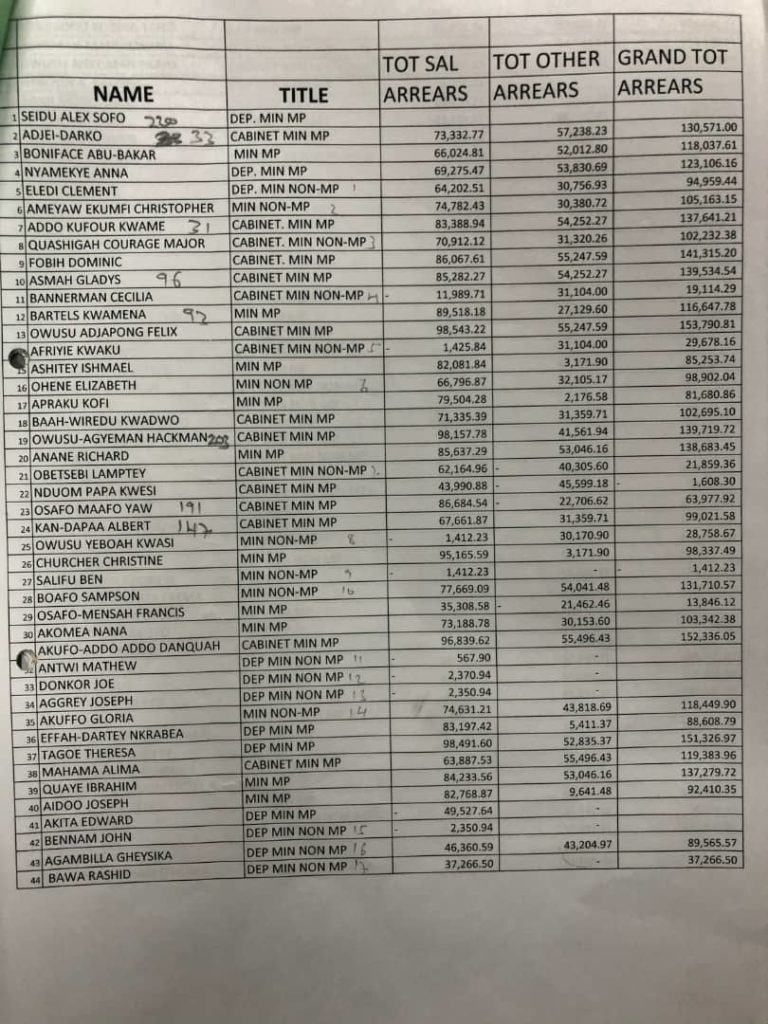 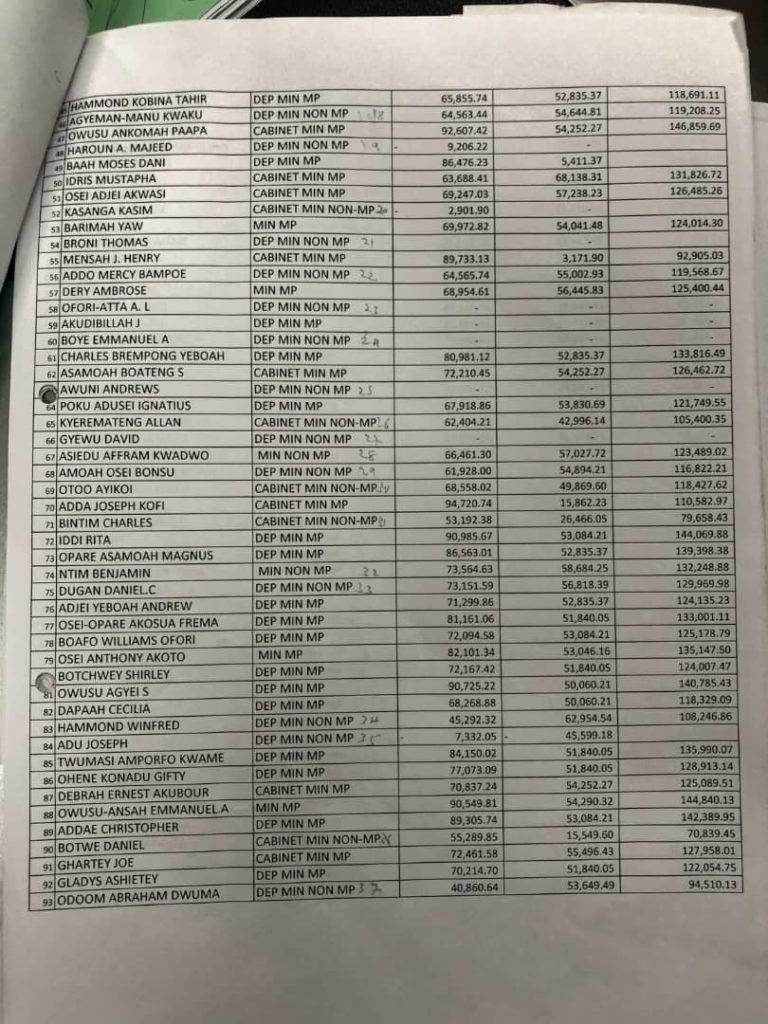 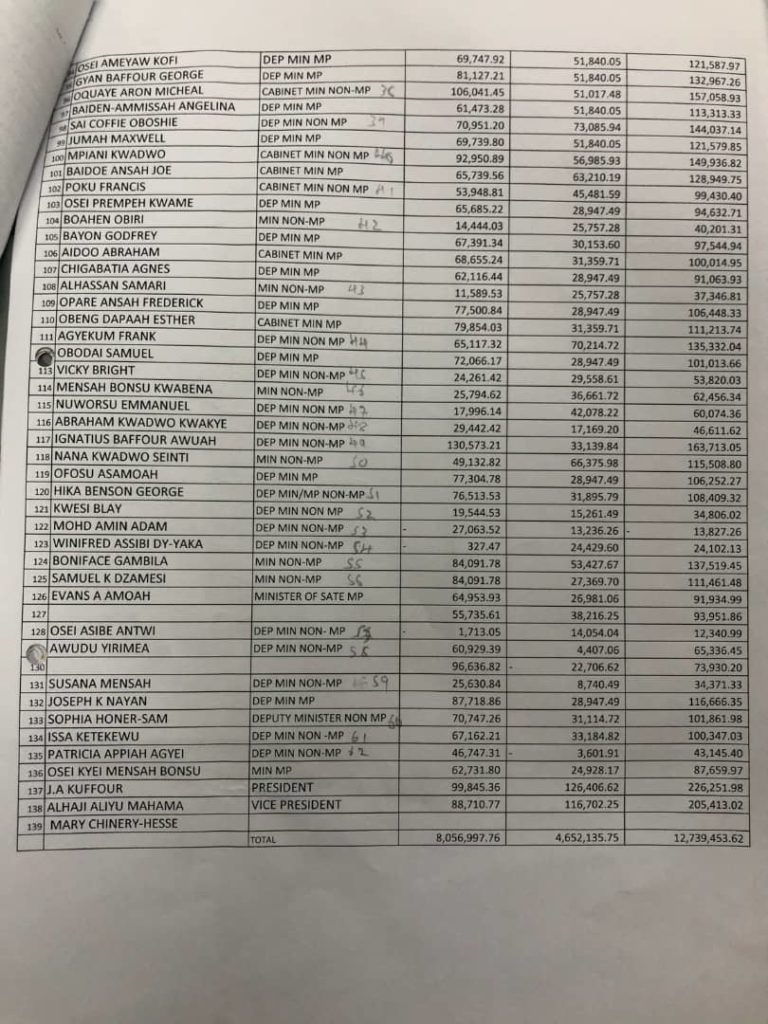 Meanwhile, Spokesperson for the Forum for Former Members of Parliament (FFMP), a former PNC MP for Bolgatanga Central, Daniel Apasare, has told Accra-based Citi FM that the Auditor-General was wrong in citing the recommendations of the Yamson Committee as the basis for his refusal to pay them.

He also argued that former President Mills had no power to vary the conditions of service approved by his predecessor, as the Yamson Committee’s recommendation sought to do.

He warned that the former MPs would use every legitimate means necessary to retrieve their money as he rubbished aspects of the Auditor-General’s letter which suggested that the MPs were insensitive given the economic difficulties facing the country because of the coronavirus pandemic.

“If that is the case, then nobody should be paid because we have a pandemic,” he said.