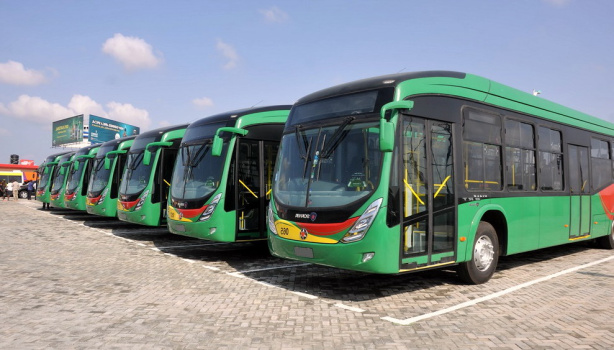 More than 150 Aayalolo buses have been grounded at the Achimota Bus Terminal in Accra, while another 60 deployed to Kumasi for use are yet to start operations.

The buses at the terminal have been grounded because the operators of the buses, the Greater Accra Passenger Transport Executive (GAPTE), can no longer bear the cost of fuel.

In all, the government secured 245 buses from the Scannia Group of Sweden in 2016 to operate a bus rapid transport (BRT) system.

To overcome the challenge, GAPTE has applied for a bailout from the government to help it pay for the cost of fuel, salaries and other operational costs, but the Ministry of Transport has turned down the request.

Staff of the company have not been paid their salaries since March this year.

“GAPTE has applied for a bailout from the government and it is expected that something fruitful will come out, since it cannot even pay its workers due to the huge cost of fueling and other administrative costs.

“It is our hope that when the assistance is offered, there will be a restructuring of the business because, as it stands now, we are in crisis,” a source told the Daily Graphic.

Investigations by the Daily Graphic showed that all the buses operating had been grounded, except six that were being used as shuttles between terminals two and three at the Kotoka International Airport in Accra.

In an interview, the Minister of Transport, Mr Kwaku Ofori Asiamah, confirmed the request for a bailout by GAPTE but said the transport operator was depleting the ministry’s budget.

“We have already bailed it out more than six times and we cannot continue this way because our budget is being depleted by the frequent requests for a bailout,” the minister said.

Mr Asiamah said the ministry had deployed some of the buses to the various regional capitals.

“The President has warned that we should immediately put the buses to use and so we have deployed many of the buses to other regions,” he said when contacted.

“The buses have not been grounded; we are going to put all of them to good use, as directed by the President,” he said.

He said the buses came in without the necessary infrastructure such as dedicated lanes and dedicated bus terminals.

“So far, we will start using the buses as the various assemblies put the necessary infrastructure in place,” the minister said.

The situation in Kumasi is not different, but the Kumasi Metropolitan Assembly (KMA), which took delivery of 60 of the buses in July this year, plans to start operating the buses from early next year.

The Chief Executive of the KMA, Mr Osei Assibey Antwi, said all was set for the operation of the buses in Kumasi after the successful piloting of three of them on the Ejisu road.

“We are learning from best practices and we want to use the model to improve on the transport system in Kumasi, based on the directive from the President,” he said.

Currently, all the 60 buses are parked at the STC bus workshop in Kumasi,

Meanwhile, a seven-acre land has been offered by the management of the Kwame Nkrumah University of Science and Technology (KNUST) to be used as a depot and workshop for the buses.

Already, some people in Kumasi, including women, have been trained to manage the buses, which have been christened “Adehyee”.

The Interim Chairman of the KMA BRT project, Mr Michael Adusei Bonsu, said all the training processes had been completed and that, hopefully, by early next year all the buses in Kumasi would start full operations.

But at the Achimota Bus Terminal, more than 150 buses have been left in the yard at the mercy of the weather, while the company and the state have not been able to generate any returns on the investment.

During a visit to the terminal, a Graphic team observed that weeds had started growing on the concrete tiles where the buses are parked.

A wire mesh that had been erected as a fence had also been turned into drying lines by some residents, traders and workers nearby.

Although patronage of the buses was quite high when the service began in 2016, it started dwindling six months afterwards from the expected 12,000 passengers per day to 9,000.

Now, on a daily basis, patronage ranges between 9,000 and 10,000 on the Amasaman-Ofankor-Achimota-Accra Central Business District (CBD) corridor.

On some rare occasions, the Daily Graphic observed that some of the buses ran without passengers.

Meanwhile, there had been promises and commitments made by GAPTE and the ministries of Local Government and Rural Development (MLGRD) and Transport to roll out the Aayalolo service on the Adentan-Tudu and Kasoa corridors but all have failed to materialise.

In 2017, the Minister of Local Government and Rural Development, Hajia Alima Mahama, said GH¢1.7 million had been made available to facilitate the implementation of other corridors in the capital, including Adentan-Tudu, to pave the way for the rest of the buses to be put to good use.

She explained at the time that the amount was to cater for the provision of signage and other fittings.

One of the major challenges bedeviling the Quality Bus System (QBS) is the encroachment of some of its terminals by trotro drivers.

Despite education and appeals from GAPTE, the situation still persists, dealing a major blow to the service.