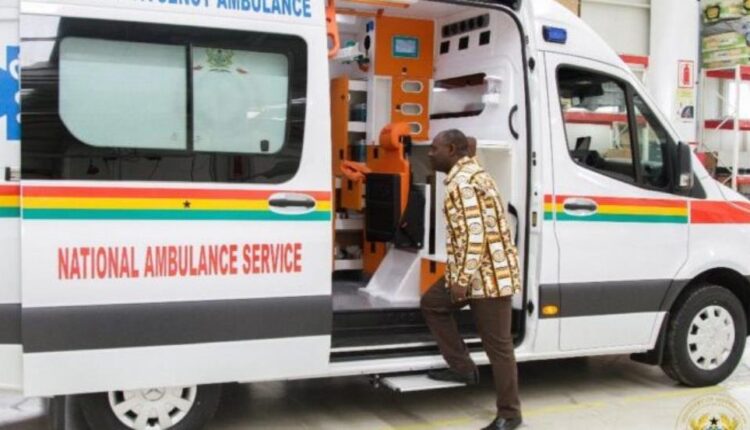 Opposition lawmaker for North Tongu, Samuel Okudzeto Ablakwa, has disclosed that monies collected by the National Ambulance Service as fuel have been diverted to other uses such as funeral support and staff motivation.

The lawmaker who was shocked at the special Performance Audit of the Auditor-General on Fleet Management of the National Ambulance Service submitted to MPs described the situation as “scandalous”.

“The report reveals that a shocking 50% of the payments by citizens as demanded by the staff of the National Ambulance Service for fuel are NOT used to purchase fuel; instead, those collections are scandalously diverted for discretionary items such as staff funeral support, buying microwaves, stationery, detergents, cost of photocopies and paying for ‘motivation of staff’” he said in a Facebook post.

In January this year, there was national outrage when pregnant Augustina Awortwe, who had to be transported from Fijai in Takoradi to the Korle Bu Teaching Hospital in Accra, following complications after a Caesarean section, lost her life due to the unsuccessful struggles of her husband to urgently raise GHS600 demanded by the National Ambulance Service for fuel.

Mr. Ablakwa noted that payments being demanded from the general public by the ambulance service were illegal, quoting Section 33(1) of the National Ambulance Service Act, 2020 (Act 1041), which says: “No person shall take part in direct or organise the collection or soliciting of money from the public for the purpose of the provision of ambulance services provided by the Service.”

The auditors further discovered that the management of the National Ambulance Service did not issue receipts for these illegal payments.

“Documents we have intercepted from the Akufo-Addo Presidency confirm that between January and December 2021, the Presidency paid GOIL an impressive GHS5,174,600.00 in two tranches of GHS3,083,550.00 and GHS2,091,050.00 to supply fuel to the National Ambulance Service for free ambulance services to citizens.

“Further analysis will show that the GHS5.17million paid to GOIL in 2021 alone by the Presidency for fuel coupons translates into a handsome GHS18,817 per year for each of Ghana’s 275 Constituencies or a decent allocation of GHS1,568 a month. This should explain why some staff of the National Ambulance Service can afford to unconscionably use 50% of illegal collections from the general public for incredulous items such as funeral support and staff motivation.”

Mr. Ablakwa noted that the rot continues unabated tragically because of leadership complicity and paralysis.

He called on all Ghanaians to end corruption because corruption kills.

“We owe it to the memory of Madam Augustina Awortwe and the many others to end this canker with incorruptible and decisive leadership.”