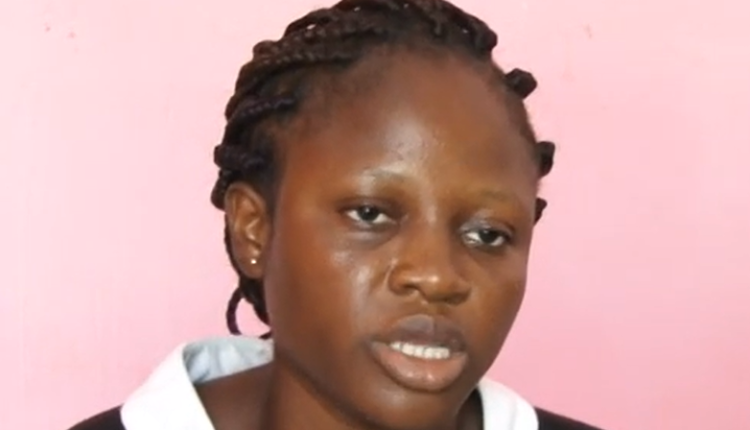 The cousin of the seven-month pregnant woman who was shot in her sleep believes the husband of the victim is behind the heinous crime.

Sitting on the edge of her chair, in the witness box during her evidence to the High Court trying the case, Priscilla Asare insists her stance is because of a series of incidents after her cousin was shot.

Priscilla, who lived with the couple in their Tema residence at the time of incidence, told the court that there was everything to show that Effort Dankwa was the brain behind the gunshot that has paralysed his wife.

Based on the evidence in court, the accused had told his wife that armed men had broken into the house.

But when the police visited the crime scene, there was no sign of forceful entry, and every valuable item was left untouched.

Except for Benita Dankwa, who was left with a gunshot wound in the chest.

With this in mind, Priscilla said she is convinced the only culprit, in this case, is her brother-in-law.

“There is no way a thief or anybody who had come with the intention of committing a crime would have had time to clean the mess [blood] off the victim.

“Which thief would also take time to hide the blood-soaked towel under the bed,” she argued.

A day after the incident, the accused, Effort Dankwa, allegedly asked his wife’s cousin to clean the crime scene.

While Priscilla was doing the chore, she claimed she saw a towel soaked in blood hidden under the bed.

She said she immediately identified the owner of the towel because Effort had always used the said towel for bathing.

Describing the towel, Priscilla said it was a green towel with flowers and three red dolls imprinted on it.

According to her, when she showed the bloody towel to the accused, he asked her to throw it away.

“When the accused told me to throw it away, I didn’t. I added the towel to the other things and took them to Community 8. There, I washed all the things but left the towel.

“I told my mother that the accused had asked me to throw it away, but she asked me to wash it because we can still use it as a rug.

“There was so much blood that I had to rinse it twice after washing,” she said.

Priscilla said the accused person’s directive to throw the towel away was a red flag that she could not overlook.

When he took his turn to cross-examine the prosecution witness, counsel for the accused, James Anum, alleged that Priscilla has been ‘coached’ to come and throw dust into the eyes of the court.

“I am putting it to you that you are not a credible witness. The accused had nothing to hide, that is why he left the room for you to tidy it up.

“The accused had never asked you to throw away the towel, but rather wash it,” Mr Anum said, contrary to what Priscilla had claimed.

But Priscilla insisted it was not case.

“He never asked me to wash it, but had asked me to throw it away. I respect the accused so would never had disobeyed him, had it been so,” she maintained.

Mr Anum continued, “since you are insisting that the accused had asked you to throw it away, ‘did the accused follow up to ask if you indeed threw it away?”

“No, he did not,” Priscilla responded.

“Well, the accused had every opportunity in the world if he wanted to hide the towel you found,” Mr Anum argued.

“The accused had hidden it under the bed,” Priscilla said.

Background of the story

Effort Dankwa, 36, is alleged to have shot and paralysed his wife in 2016. He was charged with attempted murder.

He was arrested in 2016, after police investigations identified him as the prime suspect in an attack on his wife, Benita Dankwa, who was then 29.

Benita was seven months pregnant at the time the incident occurred. She was shot in the chest, in what she believed was an attempt by her husband to kill her.

She did not die, but the attack left her paralysed. She gave birth prematurely to save herself and her baby.

Investigations by the police suggested there was no break into her house the night of the attack.

The only person she spent the night with was her husband.

Mrs. Benita Dankwa survived a cruel attack while she was seven months pregnant. Her baby survived.