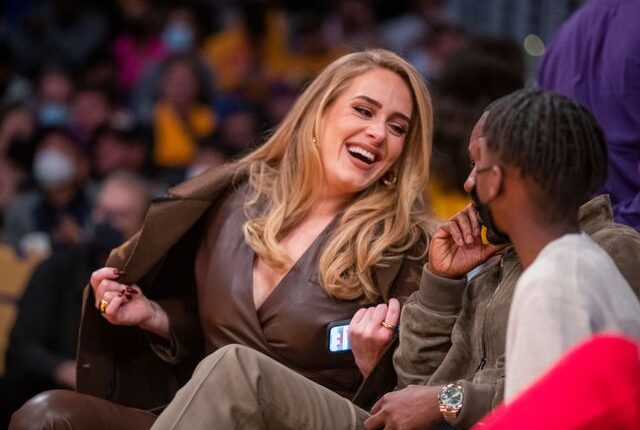 Adele got candid about her romance with Rich Paul during her One Night Only concert special Sunday on CBS.

The 15-time Grammy winner, 33, opened up to Oprah Winfrey about her relationship with the sports agent, 39, during the sit-down interview, revealing, “He’s just hilarious. Oh, he’s so funny, he’s hilarious, yeah. And very smart. You know, he’s very, very smart. It’s quite incredible watching him do what he does.”

“And just the easiness of it,” Adele added. “It’s just been very smooth.”

She also shared that this relationship is the first time she’s “loved myself and been open to loving and being loved by someone else.”

“It’s just timing,” the “Easy on Me” singer continued. “But it’d be interesting to see what my reaction is like in general to anything that hurts me now that I feel so secure in myself, and I’m talking outside of romance as well.”

Adele also opened to Winfrey, 67, about her split from ex-husband Simon Konecki, revealing that she quit drinking while going through her divorce. “Once I realized I had a lot of work to do on myself, I stopped drinking and I started working out lots and stuff like that to keep me sort of centered,” she said.

She also credited Konecki for his positive influence during their marriage, saying, “I think Simon probably saved my life, to be honest. He came at such a moment, whereas the stability that him and Angelo have given me, no one else would ever have been able to give me, like, especially at the time in my life. I was so young and I just think I got a bit lost in all of it.”

“He came in and was stable,” she added. “The most stable person I’ve ever had in my life up until that point, even now I trust him with my life.”

Adele kicked off the show with the song “Hello,” which she told Winfrey is typically the first song she performs. “It’d be a bit weird if it was like, halfway through the set, you know?” she said, adding that the song is “the beginning of me trying to find myself, and I hadn’t figured out yet what it was that I had to do for that.”

“When I wrote it, it was a real ode to like, little me, older me, all of these things,” she explained. “It’s just a song about like, ‘I’m still here.’ Like, ‘Hi, I’m still here, I still exist in every aspect of my life.'”

She performed new songs from her upcoming album 30, as well as popular favorites from her previous albums, including “When We Were Young,” “Someone Like You” and “Rolling in the Deep.”

She also gave a shoutout to one extra special guest: her 9-year-old son Angelo, who she revealed was watching her perform live for the first time at the event. When speaking to Winfrey about her hopes for her child, Adele said she only wants for him to be a “good and happy person.”

“I don’t expect anything of him,” she explained. “I don’t care what his career is, as long as he’s passionate about whatever it is that he does and that he’s happy.”

She also said that she’s open to the idea of more kids in the future: “I would like more children. It wouldn’t be the end of the world if I didn’t because I have Angelo, but yeah, I think so.”

Later, the music superstar helped a man named Quentin pop the question to his girlfriend of seven years, Ashley. Following the surprise proposal, Adele serenaded the lovebirds with a heartfelt rendition of “Make You Feel My Love.”

Shortly before the special aired on Sunday evening, Adele said on Twitter that she had “never been so nervous in my life.” She also called the Griffith Observatory “the most beautiful venue I’ve ever played.”

“Thank you to everyone who made it possible. To Oprah for allowing me to tell my truth lovingly in a safe space,” the singer wrote. “The whole thing was pretty overwhelming, I’ve seen it twice and cried my eyes out both times.”

She continued: “Having been on such a rollercoaster the last few years and then the pandemic, it was hard to imagine being on stage singing again ever. So the fact that I got to and also got to sing my new songs, has me feeling a million things at once!”

Paul also celebrated the occasion when he posted about his girlfriend for the first time on Instagram, sharing a photo of himself posing with Adele and Winfrey on Instagram. “Spelling Bee Champs with a touch of 🪐 🐐’s ❤️ 💫 #HowLuckyCanOneGuyBe,” he wrote.

Adele made her relationship with Paul Instagram official in September after months of speculation surrounding their dating status. A source told PEOPLE in July that the two had been dating for a “few months.”

In an interview with Vogue last month, the award-winning singer revealed that she and Paul started dating at the beginning of 2021 after meeting at a party two years ago.