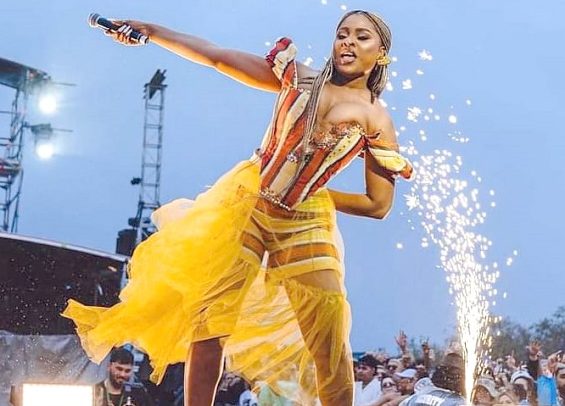 Female Ghanaian afrobeat artiste Adina Thembi, known in the showbiz scene as Adina, lifted the flag of Ghana high when she rocked the stage at the Promise Land Festival in Gold Coast, Australia with some breathtaking performance over the weekend.

The Ghanaian singer, songwriter and performer treated music fans to a collection of her popular hit songs, causing music fans to remain on their feet till the end of her performance on stage.

Hit songs including ‘Why’ featuring KiDi, ‘My Baby’ featuring Kuame Eugene and a host of others got the cosmopolitan crowd singing word for word.

It was amazing how she connected with music fans in Australia, as they kept screaming for more after her performance on stage.

Credited with a number of hit songs, Adina was the winner of music reality show dubbed ‘Stars of the Future’ in 2008.

Her single titled ‘Too Late’ won her two awards, Record of the Year and Best Female Vocalist of the Year at the 2018 Vodafone Ghana Music Awards (VGMA).

In March last year, she won the Woman of the Year award at the 3music Women’s Brunch as well as the Best Female Artiste of the Year at the Entertainment Achievement Awards (EAA).

Her genre of music is Afrobeat with a blend of RnB, Pop, and Blues. The down to earth songstress draws inspiration from God, her family, and from everyday life’s lessons. She is driven and enthusiastic with music being her number one passion.