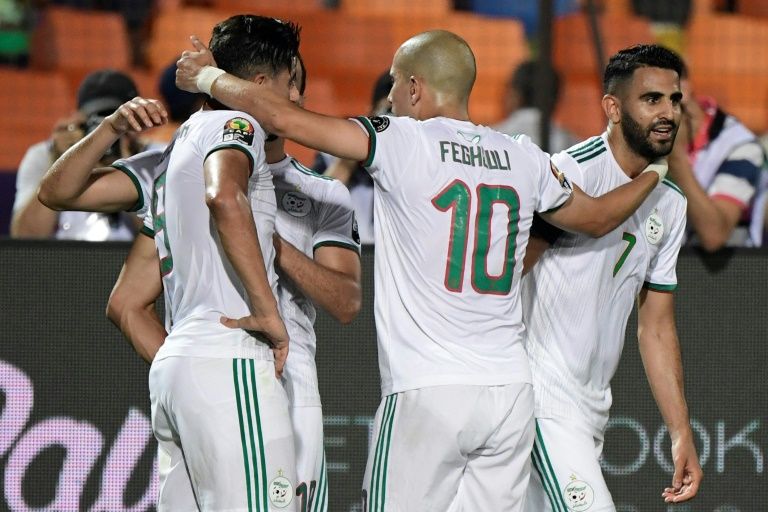 A sumptuous free-kick goal by Manchester City winger Riyad Mahrez on Sunday evening has sent the Desert Foxes of Algeria into the finals of the 2019 Africa Cup of Nations (AFCON) tournament after beating the Super Eagles of Nigeria 2-1 at the Cairo International Stadium.

A first half encounter well dominated by Algeria ended with the North Africans on the winning side and well on course to ending a 29-year old AFCON drought.

The team which has remained unbeaten from the start of the tournament showed why they have been tagged as one of the favorites to lift the trophy by constantly attacking the Super Eagles in search of their 11th goal.

Defender Ramy Bensebaini and attacker Baghdad Bounedjah came close to scoring in the first 30 minutes of the match but both wasted the fine opportunities that came their way.

Having been the better side all evening, the Desert Foxes were finally awarded on the 40th minute courtesy an own goal scored by Super Eagles defender William Troost-Ekong. The Udinese center-back deflected a cross from Riyad Mahrez into his own net.

A pulsating encounter in the second half entertained fans at the fairly packed Cairo International Stadium as the two teams went at each other in search of the ticket to the grand finale.

A review by the Video Assistant Referee (VAR) on the 71st minute awarded a penalty to the Super Eagles after the ball was adjudged to have hit the hand of defender Aissa Mandi.

Tournament top scorer Odion Ighalo stepped up and expertly converted the kick to take his tally at this year’s AFCON to four.

When it looked as if the match was headed for extra time, English Premier League sensation, Riyad Mahrez produced a moment of magic with his free-kick goal late in the second half to send his side into the finals.

They have now booked a date with the Teranga Lions of Senegal who beat the Carthage Eagles of Tunisia earlier in the day.