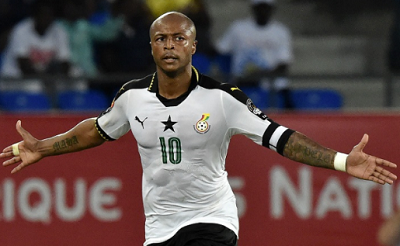 Ghana is monitoring the fitness of captain Andre Ayew for Saturday’s Africa Cup of Nations clash with Cameroon but winger Thomas Agyepong has been confirmed out of the fixture.

Ayew, scorer of Ghana’s first goal in Tuesday’s 2-2 draw with Benin in the opening group game, faces uncertainty over his readiness for the match against the Indomitable Lions.

Manchester City attacker Agyepong, on the other hand, has no chance of making a second straight appearance at the championship, in Egypt following a premature 35th minute substitution in the first game due to a head injury.

“Both players were substituted as a precautionary measure.

“Further medical test reveal that Agyepong will not be available for selection for the Cameroon game.

“However the medical team are monitoring Dede’s condition and will advise the technical team regarding his availability depending on how he responds to treatment.”

Ayew, playing in his sixth Afcon, entered the history books on Tuesday as his goal put him top as Ghana’s all-time top scorer at the tournament with nine goals.