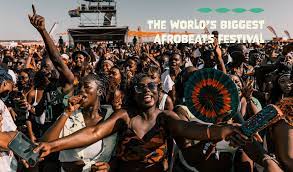 After a year of highs and countless mind-blowing moments, the World’s biggest Afrobeats festival returns to Portimão’ sun-kissed coast this summer.

Among an ever-impressive array of artists, are found the first three headline acts, including global giant Burna Boy, US hip hop royalty 50 Cent and French-Senegalese rap sensation Booba. With even more still to come, tickets for Afro Nation’s flagship show will go on sale this Thursday 26th January here (www.AfroNation.com) at 12pm GMT, with a limited pre-sale available from 9am.

Having made a name for hosting all the hottest acts and future stars, whilst representing sounds from every corner of the African continent, Afro Nation Portugal 2023 changes the game again with global stars joining the movement from all around the globe. Uniting Africa with Europe, the US, Latin America and the Caribbean, it’s a coming together of cultures for the celebration of music, dancing and more – in one truly unmissable party.

Starting with so much new Nigerian talent, this year’s biggest breakthrough Asake brings his vibrant brand of Lagos street pop to Portimão, following hot off the heels of Fireboy DML, who’s had an extraordinary run of chart success with smash hit ‘Peru’ and a subsequent remix collaboration with Ed Sheeran. Ayra Starr’s rising profile can’t be ignored, with her Afrosoul style and intoxicating voice often found on tracks with Wizkid the star boy himself, she’ll make for a memorable moment at her Afro Nation debut this June.

Another momentous debut will come from French-Malian afro-pop superstar Aya Nakamura. Known for her catalogue of hits like Djadja, Pookie, and Jolie Nana, as well as a number of high profile collaborations with the likes of Stormzy and Major Lazer, she’s also worked with with the acclaimed South London rapper Ms Banks – who herself joins the bill today, alongside fellow South London riser Gabzy, pls BNXN FKA BUJU, Tyla and more.

Showing a healthy mix of legendary acts sharing the stage with this year’s most exciting newcomers, The Compozers are back in 2023 to show us how it’s done, whilst Kenyan four-piece Sauti Sol adds almost 20 years of Afro-pop credentials to the beach this summer.

No Afro Nation party would be complete without its pioneering Piano People stage, welcoming the hottest and most influential acts from the South African Amapiano scene. This year again, Afro Nation Portugal strikes hard with the ultimate Amapiano supergroup Scorpion Kings, the famous twins Major League DJz and viral phenomenon Uncle Waffles, alongside Musa Keys, Young Stunna, Daliwonga, DBN GoGo, Vigro Deep, Moonchild Sanelly, Tyler ICU and many more. With all these DJs turning it up, this year’s Piano People party will be one for the books!

News for the flagship Portugal show follows the second edition of Afro Nation Ghana in 2022, which saw Meek Mill crown his momentous trip to Accra with a long-awaited headline set at the festival during Detty December. Afro Nation’s exciting return to West Africa was a uniting moment for thousands of fans from the global diaspora, and marked a progressive new era of music and arts festivals in the region. So many incredible Ghanaian acts had their chance to shine in Accra, with Black Sherif – who stole the show with his rendition of Bob Marley’s ‘Redemption Song’ – Gyakie, Camidoh and more all now set to bring their best to Afro Nation Portugal 2023.

Afro Nation’s debut US show has also been revealed. With news of Afro Nation Miami landing this 27th & 28th May, the packed lineup features Burna Boy, Wizkid, Rema, Asake, Beanie Man and many more. With the unstoppable rise of Afrobeats, the Afro Nation movement just keeps growing and evolving every year, with more parties keeping people dancing all year round!

By the culture, for the culture: Afro Nation Portugal stands as an unmissable highlight of the summer festival and takes place 28-30th June 2023. Tickets go on sale Thursday 26th January, with a limited pre-sale at 9am GMT followed by General Sale at 12 pm GMT. All tickets are available via: www.AfroNation.com

More to be announced!
Distributed by APO Group on behalf of Afro Nation.