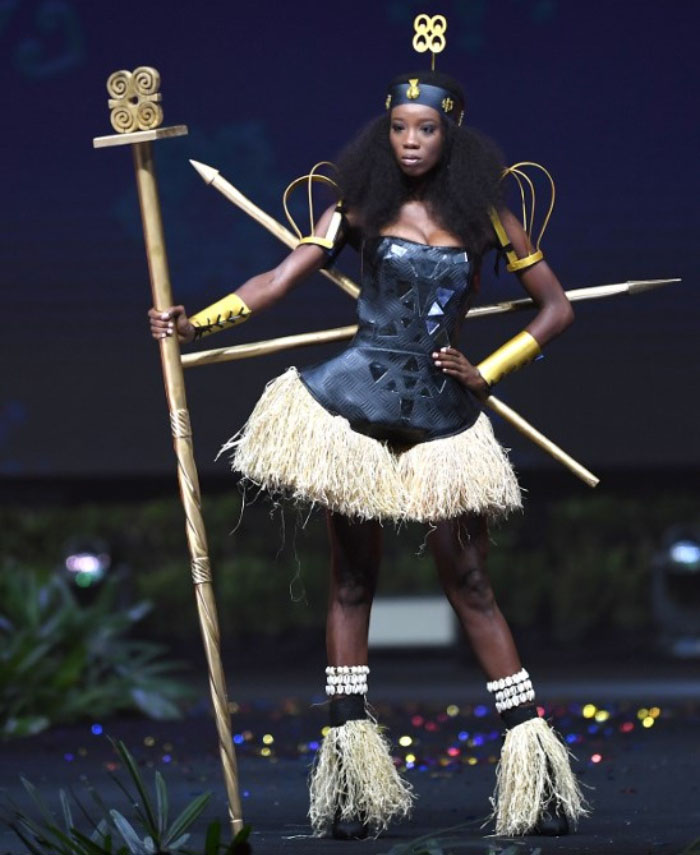 Ghana’s queen at this year’s Miss Universe beauty pageant currently underway in Bangkok, Thailand, Akpene Diata Hoggar made Ghana proud when she drew loud applause at the National Costume Contest held yesterday as part of activities leading to the final contest on December 17.

Ms Hoggar hit the stage with a costume that depicted a modern day Nana Yaa Asantewaa, the warrior queen of the Asantes from the Ashanti Region of Ghana.

She stood astride on the stage for some seconds, with a fierce look in her eyes, pushed up the traditional staff in her right hand three times, and then walked off with the authority and elegance of a true warrior queen.

Her attitude, looks and all, were in line with what the great Yaa Asantewaa said many years ago, “If you the men of Asante, will not go forward, then we will. We, the women, will. I shall call upon my fellow women. We will fight! We will fight till the last of us falls in the battlefields.”

It is obvious from her performance at the pageant so far that Miss Hoggar is determined to make a great mark at this year’s event, which has attracted queens from nearly half of the countries of the world, that is 94 states out of 200 plus.

According to Miss Hoggar, who is also Miss Universe Ghana 2018, “A true queen is also a warrior for her people and being the queen that I am, my national costume depicts my strength and power. It also highlights my connection with the sun and the earth”.

“The sun-like head piece made of gold illustrates the wealth of my country, Ghana. On the national costume are symbols, each bearing unique representations of cultural expressions, concepts, values and traditional mythology,” she said.

She explained that the symbol above the crown is termed, “MATE MASIE” (What I hear, I keep). It highlights wisdom, intelligence, and shrewdness.

The symbol on the staff is “DWENNIMMEN” (ram’s horns) – an Adinkra symbol for strength with virtues of humility.

The symbols embellished on the crown are called “GYE NYAME” (Except God). This symbol depicts the importance that the Ghanaian people place on their spiritual identity that is reflected in their religiousness.