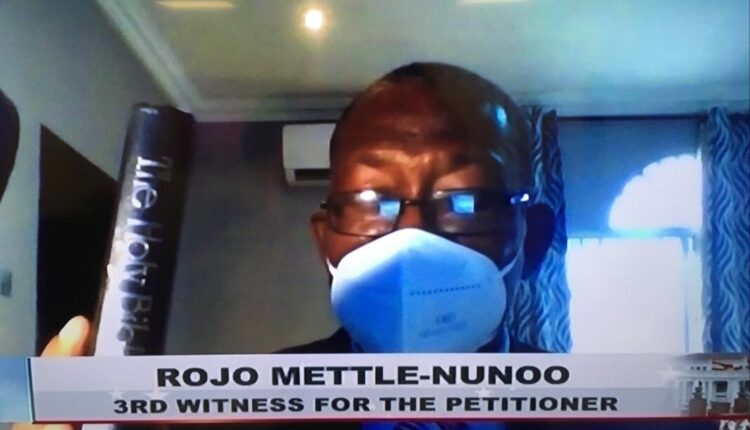 Counsel for President Akufo-Addo in the ongoing election petition has urged the Supreme Court to toss out some paragraphs of the witness statement of Robert Joseph Rojo Mettle-Nunoo.

Mr Mettle-Nunoo is one of the representatives of the petitioner John Dramani Mahama in the ongoing election petition.

NDC flagbearer Mr Mahama is challenging the results of the 2020 election which was declared in favour of the NPP’s Nana Akufo-Addo.

It was the case of the president’s counsel Akoto Ampaw that some paragraphs of the witness statement filed by Mr Mettle-Nunoo have no bearing on the matter before the court.

A total of 23 paragraphs are now in contention.

On the other hand, counsel for the petitioner Tsatsu Tsikata argued that all paragraphs were significant to uncovering the said illegalities that characterised the December 7 general elections.

According to him, there is no basis for striking out any portion of Mr Mettle-Nunoo’s 32-paragraph witness statement filed on Thursday, February 4, 2020.

Mr Tsikata responded to some specific paragraphs which  Nana Akufo-Addo’s counsel wanted to be dismissed.

In the case of paragraph 5 which talks about a request for video documentary done by the Electoral Commission, Mr Tsikata said the said video has already been submitted in evidence by the two witnesses of the petitioner – Johnson Asiedu Nketia and Dr Michael Kpessa-Whyte – who gave their statement in the course of the week.

Explaining further, Mr Tsikata pointed out that the evidence was not objected to and currently before the Supreme Court.

Hence, “We are respectfully submitting that what is stated in Paragraph 5 is no different from what is already before you about the video documentary”.

Mr Tsikata continued: “All that this witness is adding is that he is willing to put his credibility on the line so that if anybody wants to have recourse to the video, they are entitled to. Depending on the cross-examination we may indeed come before you with an application that that video should be produced in court and played.”

The court is yet to rule on whether the said paragraphs will be maintained or expunged from the witness statement.

The court struck out seven of the 10 paragraphs that were pointed out by the legal team for President Akufo-Addo.

In Mr Mettle-Nunoo’s 32-paragraph witness statement chronicling some of the major events that occurred in the EC strong room, he accused the EC boss Jean Mensa of not performing her duties well.

He touched on some concerns regarding summary sheets from the Greater Accra, Ashanti, Eastern and Northern Region respectively.

The third witness said in his witness statement that EC officials misled him to sign the regional collation sheet for the Ashanti Region.

The NDC representative explained that he signed the sheet because there was a signature of Mr Mahama’s agent on it.

According to him, the EC boss told him that, all the concerns he had raised in the strong room against the collation of the presidential results were genuine.