The Presidency has announced a compilation of 19 names and ministerial portfolios that will constitute President Nana Akufo-Addo’s second-term cabinet.

The list was released on Thursday afternoon and it features a repetition of certain names and portfolios that were first included at the beginning of the first term. The second cabinet will also hold three positions fewer than the first.

The Ministries of Transport, Monitoring and Evaluation, as well as Regional Reorganisation, will not be in this cabinet. The latter ministry may be considered to have run its course as Ghana’s regions have now successfully been reorganized.

The names retained with the same portfolio as in 2017 include Ken Ofori-Atta for Finance Minister, Alan Kyeremanten for Trade and Industry, Dominic Nitiwul for Defence and Ambrose Dery for Interior.

Others in the above-mentioned category include Shirley Ayorkor Botwe at the Foreign Affairs Ministry, Kweku Agyemang-Manu for Health, Ignatius Baffour Awuah at Labour and Employment Relations and Dr. Owusu Afriyie-Akoto at the Agricultural Ministry.

Some ministries will also be making an entrance in the second term. Under the leadership of Osei Kyei Mensah-Bonsu, the Parliamentary Affairs Ministry will now be a part of the cabinet. The same goes for the Ministry of Works and Housing, under Francis Asenso-Boakye.

Dr Matthew Opoku-Prempeh who went into the last cabinet as Minister of Education will return to the new one as Minister of Energy. John Peter Amewu, formerly at Lands and Natural Resources, is now the Minister for Railways Development. Dan Botwe also ditches Regional Reintegration for Local Government and Decentralisation.

Among the new faces in the cabinet includes Godfred Yeboah Dame who is now the substantive Minister for Justice and the Attorney-General. Others are Samuel Abdulai Jinapor who will oversee the Ministry of Lands and Natural Resources and Ibrahim Awal Mohammed at the Ministry of Tourism, Arts and Culture.

The cabinet in the constitution

The 1992 constitution of Ghana grants the President the power to put together a cabinet of not fewer than 10 and not more than 19 ministers. In spite of this, presidents have been known to invite other ministers to sit in cabinet meetings since the law grants that possibility if said ministers are of a vital need to the meeting.

The body will have a secretary who is also appointed by the head of state. Mercy Yvonne Debrah-Karikari is currently the secretary to the cabinet. 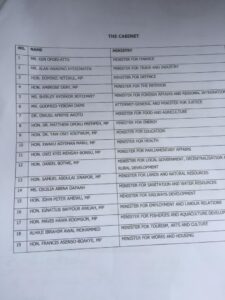 SHS student dies in ghastly crash while returning from a nightclub