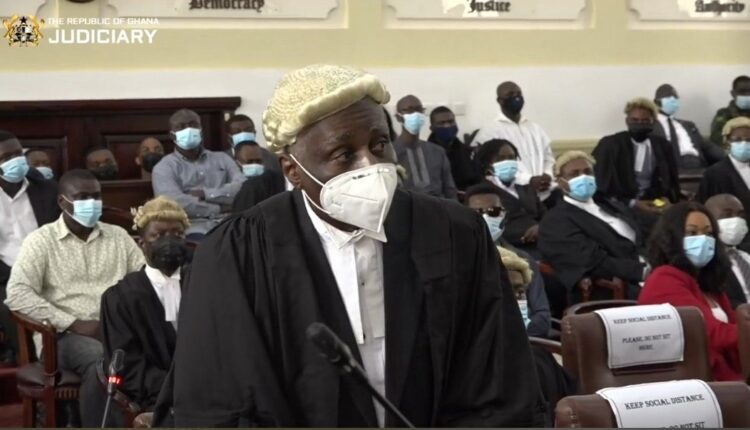 “Am I not allowed to mention Jean Mensa’s name?” – Tsikata clashes with Supreme Court judge

The 2020 election petition is living up to its dramatic expectations as the counsel for the flagbearer of NDC, John Dramani Mahama, clashed with a Supreme Court judge.

The legal blows between Mr Tsikata and a Supreme Court Judge, Nene Amegatcher, began when he posed questions he claimed were key to discovering the ‘errors’ committed by the EC.

According to Mr Tsikata, the interrogatories (questions) were critical as it would help the apex court determine the authenticity of the results that saw the NPP presidential candidate, Nana Akufo-Addo,  emerging as the winner of the 2020 polls.

But presenting the list of questions on Tuesday, Mr Tsikata made reference to the Electoral Commission Chairperson rather than the office that conducted the polls.

That did not sit well with  Justice Nene Amegatcher.

The apex court judge insisted that the questions should be directed to the office of the Chairperson and not come across as a personal attack on Mrs Mensa.

Here are the exchanges in court. Tsatsu Tsikata (TT) and Nene Amegatcher (NA).

TS: At what point did the Chairperson realise there were some anomalies with the results declared on December 7, 2020, elections…this is a question only one person in this world can answer

TT: Respectfully my lord, there is only one Returning Officer for the presidential election and that is the EC chairperson.

NA: let’s leave it at that, Chairperson of the Electoral Commission and not her person

NA: The question should be to the office

TS: I want to understand, am I being prohibited from mentioning the name of the Chairperson, is that the issue?

NA: Reading through your petition which makes constant emphasis on the name, what I am telling you is that we will be satisfied with the designation because in her absence any of her deputies could act in that position

NA: So, it is an election petition and you are challenging the election, it is sufficient that the institution charged with conducting the election had done their work and the Chairperson who is the head represents that institution and not the personality

TT: With the greatest respect, I believe that the constitutional requirement regarding the returning officer and the particular circumstances do not make it possible for someone to step in for the Chairperson, it cannot be like you are envisaging.

NA: The institution had done the work and not the personality

TT: The particular circumstances that we are dealing with in this case, do not make it possible to have the situation that you are envisaging where you have somebody else step in for the Chairperson. The constitution makes the Chairperson and only that person the Returning Officer and in the circumstances of this case that Chairperson happens to be the person we referred to in the petition who undertook her responsibility in accordance with the constitution and legal situation that we have, I am not mentioning her name by targeting her individual…that is far from it. I do not target her when I mention her name as the person who declared the results, that is a fact.

NA: Thank you, you may continue with your interrogatories

Mr Mahama is seeking permission from the Supreme Court to allow him to elicit answers that border on how the Chairperson of the EC, Jean Mensa, arrived at the figures that projected Nana Addo Dankwa Akufo-Addo as the winner of the 2020 presidential polls.

The EC is to respond to the National Communications Authority (NCA) role in the transmission of the election results to the headquarters of the EC.

Mr Tsikata quizzed, “How did Mrs Mensa get to realise there were errors in figures she had announced in her declaration on December 9?”

In law, interrogatories are written questions that one party sends to another and the responding party is expected to submit a response under oath. They form part of the discovery stage in the case.

In Ghana, there is no limitation to the number of interrogatories that each person in a law suit can propound on the other parties, but that is not the case in other countries.

In the US, particularly, the federal civil courts, one party may send 25 interrogatories to the other. The 25-interrogatory limit applies to all parts and sub-parts of a single question.

In 2012, the petitioner Nana Addo Dankwa Akufo-Addo filed similar interrogatories demanding answers for questions that will validate his claim against the EC, the court presided over by William Atuguba allowed it.

However, four years down the line, the court says it has reviewed its procedures and will not allow the litigation tactics which was likely to delay the outcome of the case.