Residents of Jamestown Beach, a fishing community in Accra, are racing against time to salvage their properties, as city authorities demolish structures to make way for the construction of a fishing harbour.

The demolition exercise, which began at about 5 a.m, had city officials and armed policemen storm the coastal community to pull down a chain of wooden structures and other buildings.

A church building was among the over 100 structures pulled down. 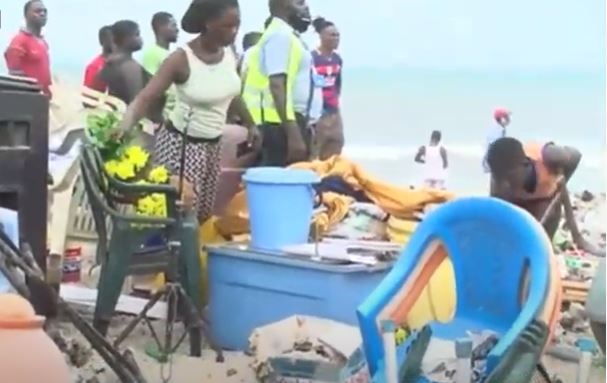 The Head pastor of the church maintained he would only take his cassock and bible, adding that he was leaving everything to God.

While many of the residents tried to salvage their belongings, others including women and children, sat in despair and dejection.

Contrary to the claims of some residents, the Chief Fisherman of Jamestown, Nii Armah Wulu, said the community members were in support of the exercise because the Accra Metropolitan Assembly( AMA) had duly engaged them about the importance of the project.

“The AMA gave us letters about the demolition and held meetings with us. The exercise was supposed to have happened earlier, but because of the partial lockdown of Accra, it was delayed,” he said.

“A lot of the people that live here are squatters and, therefore, they do not have the right documentation to demand for compensation,” an opinion leader told JoyNews monitored by theghanareport.com.

“We were not informed, we were just here and the people came to do the demolition, I don’t have anything on me, as I have used all my money to buy goods.

It is shameful, we are all citizens, so if something like this is going to happen they should have  informed us” Maa Teckie, an affected resident, said