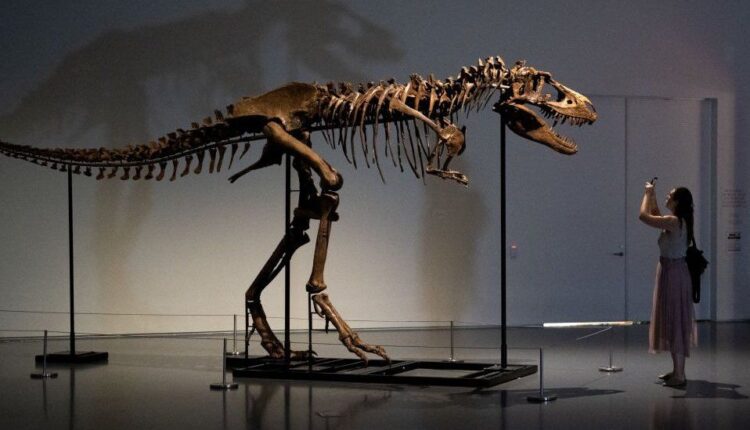 A rare ancient dinosaur skeleton has been sold in the US to an unknown buyer for just over $6m (£4.95m).

It was offered up by Sotheby’s and sold at the firm’s natural history auction in New York City on Thursday.

The fossil is that of a Gorgosaurus – a distant relative of the infamous and deadly Tyrannosaurus rex – that was discovered in 2018.

The anonymous buyer will have the unique opportunity to bestow a nickname on the one-time apex predator.

The sale is the second-ever of a fossilised dinosaur skeleton auctioned by Sotheby’s. The first, a T-rex nicknamed Sue, was sold to Chicago’s Field Museum in 1997 for $8.36m.

The Gorgosaurus was expected to attract bids of up to $8m.

It is the only specimen of its kind to be offered up for private ownership. There are only 20 fossils like it known to exist around the world.

The Gorgosaurus roamed the Earth about 77 million years ago and, like the T-rex, it had a large head, a mouth full of curved serrated teeth, and small two-fingered front limbs.

Though smaller than its cousin dinosaur, it was faster, fiercer, and packed a stronger bite, optimised for “cutting into thick skin and penetrating deep into the flesh of their prey”, according to Sotheby’s.

The fossil was discovered on private land in the US state of Montana. It has 79 bone elements, stands 10 feet (three metres) tall and is 22 feet long.

Other natural history items up for auction on Thursday include a complete T-rex rooted tooth, which sold for just over $100,000, a Triceratops skull, which sold for $661,500, and a saber-toothed tiger skull.

While a nickname for the Gorgosaurus skeleton has not yet officially been announced, “Gorgeous George” emerged as a strong contender among Sotheby’s social media followers.