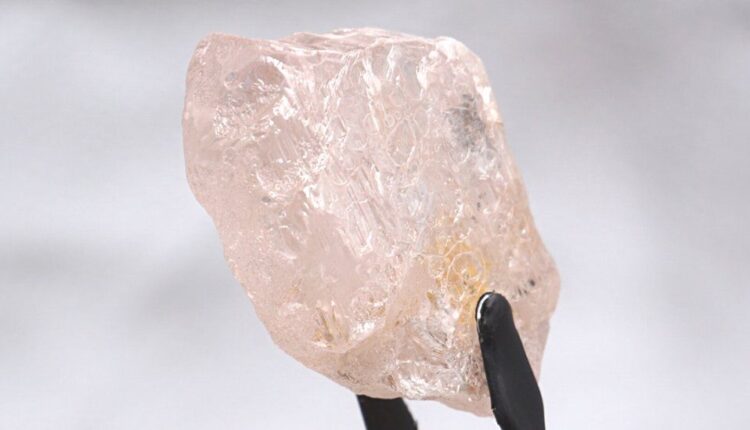 Angola pink diamond believed to be largest found in 300 years

This rare pink diamond, weighing 34 grams, is thought to be the largest discovered in the last 300 years.

The 170 carat stone has been named the “Lulo Rose”, after the mine in Angola where it was found.

It is believed to be the largest pink diamond mined since the 185-carat Daria-i-Noor, which was cut from a larger stone and is now among the Iranian crown jewels.

The Lulo Rose is a type 2a diamond, meaning it has few or no impurities.

“This record and spectacular pink diamond recovered from Lulo continues to showcase Angola as an important player on the world stage,” said Diamantino Azevedo, Angola’s minister of mineral resources.

It is the fifth largest diamond recovered from the Lulo mine – a joint venture between Australia’s Lucapa Diamond Company and the Angolan government.

Similar diamonds have been bought for tens of millions of dollars in the past, with one – known as Pink Star – selling at a Hong Kong auction for $71.2m (£59m) in 2017.

The largest known pink diamond is the Daria-i-Noor, discovered in India, which experts believe was cut from an even larger stone and now forms part of the Iranian crown jewels. Another diamond cut from the same stone is also part of the same collection.

The largest rough diamond of any colour ever recorded is the Cullinan diamond, found in South Africa in 1905.

Weighing 3,107 carats – more than half a kilogram, it was cut into 105 different stones.

The largest of these – the Cullinan I – is the biggest clear cut diamond in the world and forms part of the UK Crown Jewels.