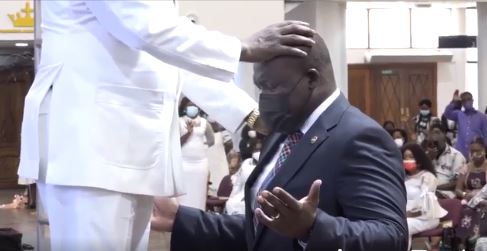 For championing a bill against the advocacy and legalization of same-sex relationships in Ghana, the Member of Parliament for Ningo-Prampram, Sam Nartey George, was the receiver of tonnes of prayers on Sunday, October 10.

The leader and founder of Perez Chapel, Bishop Charles Agyinasare, anointed the MP, an elder of the church, for the ‘task’ ahead before the close of service.

“For this battle, You [God] will bring a new anointing upon him and great grace. We say no weapon fashioned against you shall prosper…protect him, protect his family,” Bishop Agyinasare prayed.

“Thanks so much, Papa, Bishop Charles Agyinasare, for always standing with me through thick and thin. I believe the GOD who called you would never let us down. We shall succeed. We shall prevail”.

Discussions about LGBTQ+ rights in Ghana touch on sensitive chords: culture and religion. Crusaders behind the bill base their arguments on the belief that LGBTQI+ activities are alien to the country’s cultural norms and values and are also frowned upon by all major religious groups in Ghana.

The Office of the National Chief Imam also supports the bill stating, “homosexuality is a deviant behaviour totally unacceptable in Islam. Although our religion allows us the latitude to ponder and reconsider some issues, homosexuality is certainly not one of them”.