The Arise Ghana demonstration, which started peacefully late afternoon today (Tuesday, 28 June 2022), has turned chaotic with injuries to some protestors and police officers due to violence.

Scenes from the Kwame Nkrumah Interchange area showed the glass windows of a police bus completely damaged after the protestors pelted stones at officers. 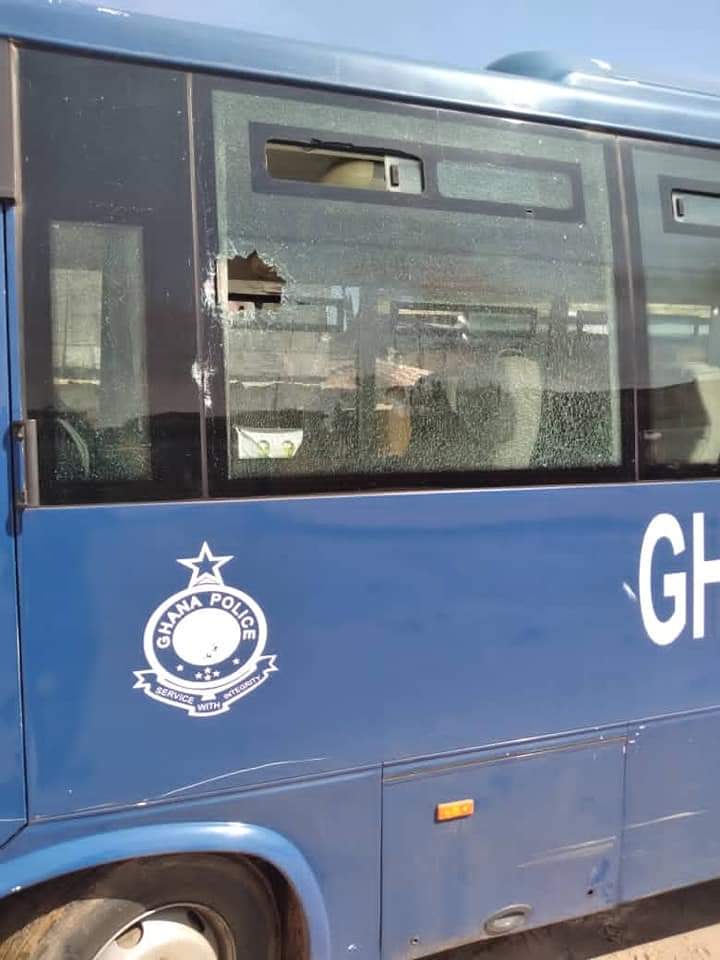 The demonstrators are also said to have burnt car tyres in the middle of the Kwame Nkrumah Circle road, prompting the firing of teargas from the police.

The law enforcement officers had formed a human barricade to stop the protestors who insisted on using their original route instead of the route ordered by the Accra High Court. 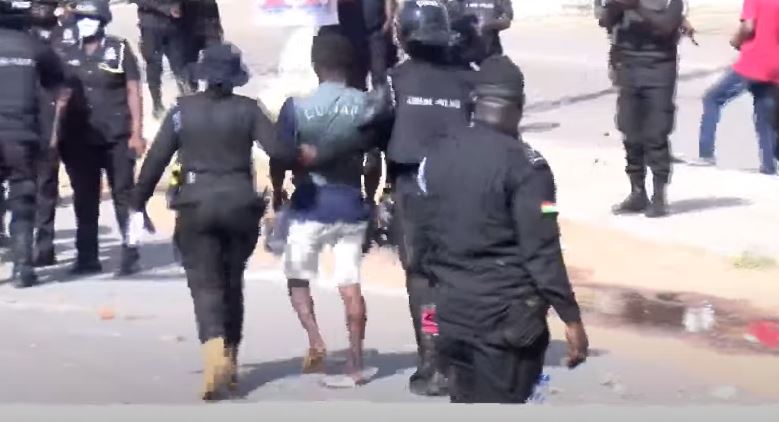 The protestors attempted to push their way through to use the Ring Road towards the Ako-Adjei Interchange instead of Adabraka, and the police pushed back with their shields, causing the peaceful demonstration to turn chaotic.

On Monday, 27 June 2022, an Accra High Court directed that the demonstrators start their protest from the Obra Spot at Circle and end at the Independence Square.

The deputy National Youth Organiser of the opposition NDC, Edem Agbana, who was at the demonstration grounds has expressed his disappointment with the manner in which the police are treating the unarmed protestors.

“We are here for a very peaceful demonstration, we had an agreement with them (Police) but all of a sudden the police tell us order from above so they are trying to go against our earlier agreement with them and so it led to some confrontations where they fired teargas so out of self-defense some pelted stones. 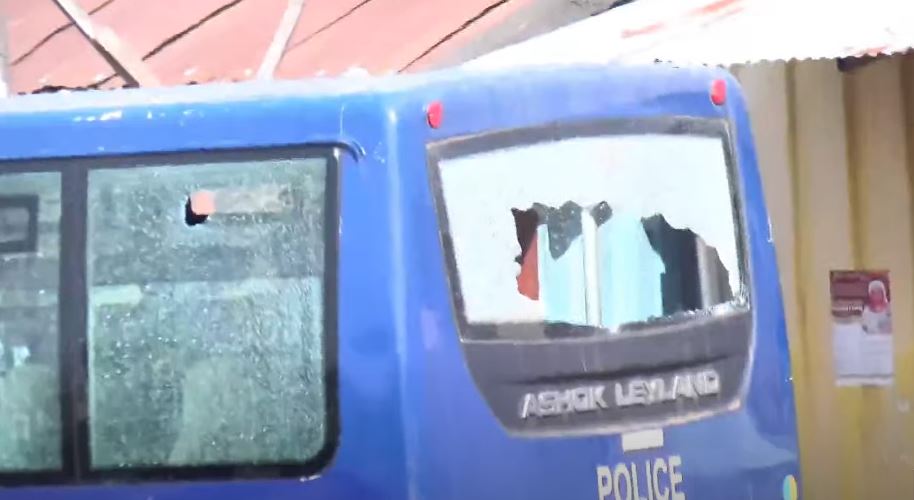 “But you see, the ones we must blame are the people at the Flagstaff house and if Dampare had not allowed himself to be used as a poster boy of violence for President Akufo Addo, we will not be here today. This is because we’ve had an agreement with the police so who is the order from above?” he quizzed.

Currently, the Kwame Nkrumah Interchange road has been closed, with no movement from either vehicles or persons.

Three protesters have also been arrested.

The three were allegedly picked up for their involvement in the chaos that marred the peaceful demonstration. 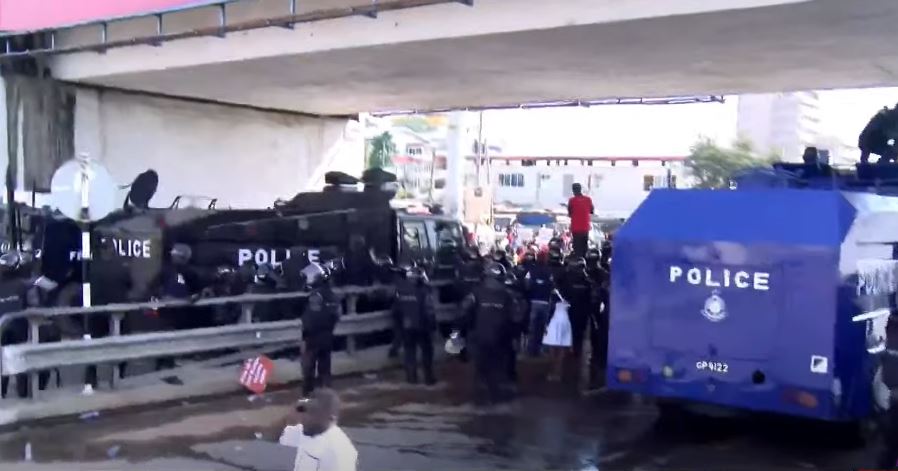 Meanwhile, the police administration has condemned the attack on its officers.

A tweet on the development, said, “Attack on police in the Ongoing Arise Ghana Demonstration. What a shame, we were there to protect you and ensure your safety, but you throw stones at us, injure and hurt us. This behaviour is unacceptable and must be condemned.”

Earlier assurance by the police

The Inspector-General of Police (IGP), Dr. George Akuffo Dampare, has urged officers attached to the Arise Ghana demonstrators to treat them with respect and dignity.

For him, it is important to remember that demonstrators are equally human beings, most especially Ghanaians, and possibly brothers and sisters to the same officers.

He was addressing officers gathered at the National Police Headquarters for the planned protest today (28 June 2022).

“If it is you or your effort that is going to take for somebody to continue to live to accomplish his or her God-given destiny, please do that and do that joyously; do that with love; do that with a sense of humility and humanity, and at the end of the day, we win the hearts and minds of the demonstrators,” he urged.

As part of the preparations, the IGP announced that for the first time, two mobile police hospital units had been deployed to assist demonstrators or officers who might need medical attention during the protest.

“We want to show the world that our country, our democracy, is growing from strength to strength, and this is the finest opportunity to demonstrate that, and we cannot miss this opportunity. At the end of the day, we want to see that the demonstrators themselves and leadership will be so happy with the police that they will say thank you to the police. 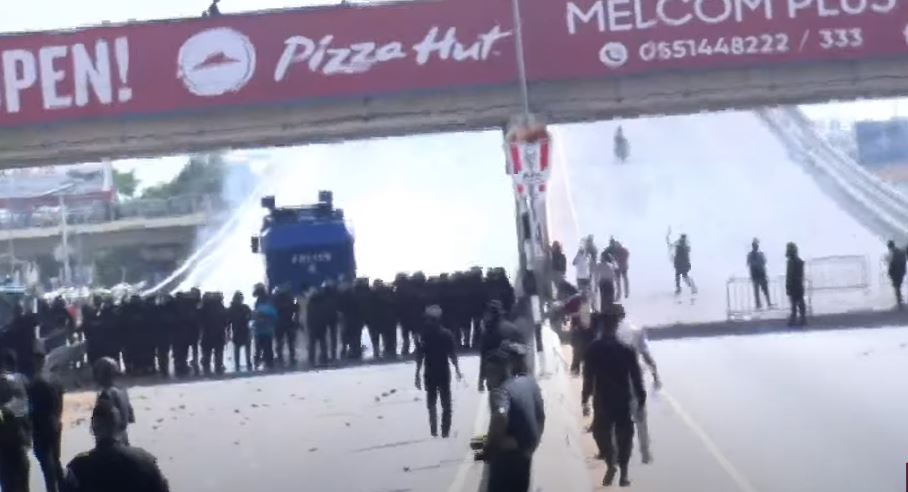 “Two, the rest of the people of Ghana will also be so glad in terms of how the police conduct itself, and in terms of the way the demonstrators have behaved such that we can be proud of ourselves as a country, and three, the rest of the world will continue to see us as a beacon of hope in the sub-region and beyond when it comes to democracy,” Dr Dampare added.