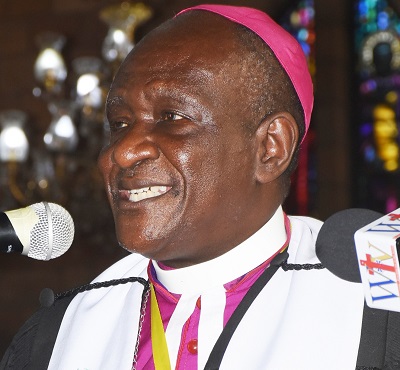 He said though Africans had thrown support behind Black Americans against racial abuses and institutional racism in the United States, as evident in “Blacks Lives Matter,” they conveniently subject one another to “tribalism and tribal” bigotry.

“Africans appear to have conveniently forgotten their own problem of broken intra-race relations that has manifested in the form of tribalism, a problem that’s no less prejudicial than racism.” Rt. Rev. Osabutey said.

He said this at the commemoration of the 2022 International Day of Peace, which is Wednesday, September 21, with this year’s event dubbed: “End Racism, Build Peace” globally.

In his commemorative speech, Rt. Rev. Osabutey said ethnocentrism was worse than racism because whereas the White race appeared united in their racism against other people of colour, the Black race was divided along tribal lines in acrimony.

Lamenting the Konkomba-Nanumba war, Alavanyo-Nkonya and the Bawku conflicts, the Chairman urged the public to see and embrace peace as “an essential commodity that propels development, something we all needed especially in a diverse and ethnic society.”

Rt Rev Osabutey said Ghanaians especially those in the Greater Accra Region should learn to tolerate each other as the region constantly received an influx of foreigners including West Africans and multinationals.

According to the 2022 Global Peace Index, Ghana is the second most peaceful country in Africa after Mauritius.

“Peace attracts development and foreign direct investment as no one likes to do business in a volatile environment hence the need to protect the peace the country we are enjoying,” he said.

The International Day of Peace was declared by the General Assembly of the United Nations in 1981, to strengthen the ideals of peace both within and among all nations and people.