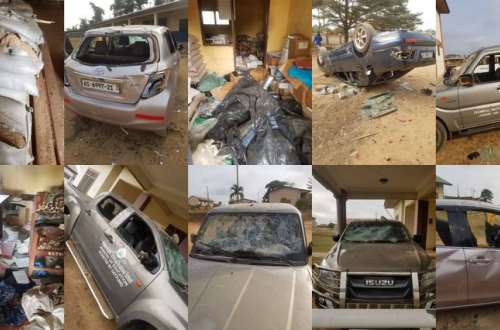 Chairman of the Ashanti Regional Security Council, Simon Osei Mensah, has asked the Police at Effiduase, to immediately declare the School Prefects of the Krobea Asante Technical-Vocational Institute, wanted and arrest them.

It follows the rampage in the school at the weekend. Parents and guardians have also been advised to surrender their children to the Police immediately for the law to take its cause.

Mr. Osei Mensah, gave the directive, after a visit to the school at Asokore in the Sekyere East District in the Ashanti Region.

On Saturday night, students of the Krobea Asante Technical and Vocational Institute in the Sekyere East district in the Ashanti Region reportedly went on a rampage.

Some reports attribute the incident to the students not being satisfied with the performance of their immediate predecessors at the NAPTEX external examination among other allegations.

The Principal of the Institute, Evans Douglas Salvo, spoke about what actually happened.

On the recommendation of the Sekyere East District Security Committee, the Ashanti Regional Security Council, REGSEC in consultation with the Regional Education Directorate closed down the Institute indefinitely.

In a follow-up visit to the school, the Chairman of the REGSEC, Simon Osei Mensah, announced the composition of a five-member Investigation Committee to unravel all circumstances regarding the riot. He said the date for re-opening the school depends largely on the report and subsequent measures to be put in place.