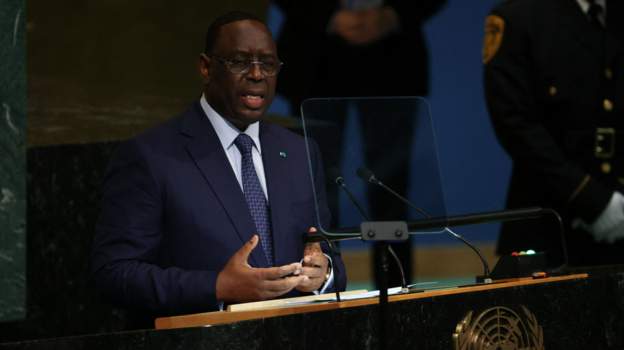 Senegal’s President Macky Sall has called for the lifting of sanctions against Zimbabwe in his address to the 77th UN General Assembly in New York.

The Senegalese leader, and the current chairman of the African Union, said the measures against Zimbabwe were aggravating the suffering of the people.

The US and the European Union (EU) maintain sanctions on Zimbabwe, citing a lack of progress in democratic and human rights reforms as well as restrictions on press freedoms.

The sanctions target both specific individuals and companies – including President Emmerson Mnangagwa.

Zimbabwe’s economy has faced deep economic crises over the past few years with periods of hyperinflation – but there’s little evidence to suggest that the sanctions are responsible.

President Sall was the first African leader to address the General Assembly.

He urged the Security Council to address conflicts in Africa in the same way it addressed other conflicts.

He also called for reforms in the council that would make it more inclusive and possibly grant Africa a permanent seat.

Mr Sall also called for Africa to be given a seat in the G20 group, which includes leaders of the world’s 20 major economies.

More African leaders are expected to address the UN general assembly on Wednesday on the second day of the high-level debate.