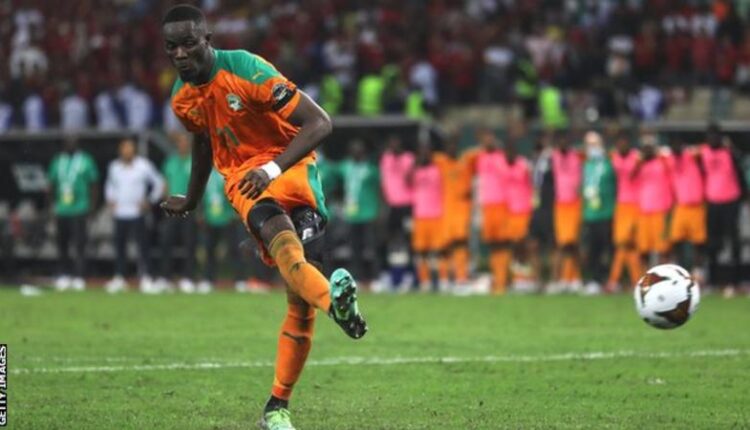 Ivory Coast coach Patrice Beaumelle said defender Eric Bailly was “very down” after his penalty was saved in their last 16 shoot-out defeat by Egypt at the Africa Cup of Nations.

The Manchester United man saw his effort tipped on to the bar, and the Elephants were knocked out 5-4 on penalties following a 0-0 draw.

“He was crying and it was very hard,” Beaumelle told BBC Sport Africa.

“I hugged him and I just said ‘You are a big champion’.”

Centre-back Bailly had returned to the Ivory Coast side in Douala after suffering a head injury in their second group match.

The 27-year-old sported a rugby scrum cap for protection and impressed at the back over 120 minutes, but substitute Egypt keeper Gabaski pulled off a crucial save to deny Bailly from 12 yards.

Afterwards, Beaumelle was full of praise for Bailly’s attitude.

“What he has done during the competition, he has shown that he is a big champion,” the Frenchman added.

“All the big champions miss penalties, I have so many examples.

“I think the goalkeeper did well. He saved two or three chances in extra-time and saved the penalty from Eric.

“You know, when you lose on penalties you have nothing else to say. I am very sad for the boys because my feeling was we could go very far in this competition.”

Ivory Coast had beaten defending champions Algeria 3-1 to top their Nations Cup group in Cameroon and had looked capable of extending their bid for a third continental crown.

Their encounter with Egypt in Cameroon on Wednesday was a close game and the nature of the defeat left Beaumelle “sad and disappointed”.

“I think it was a very balanced game,” he said.

“Each team got opportunities and deserved to score, it was 50-50 but a very good game. When you go to a penalty shoot-out it is hard.

“We didn’t want to stop like that. When you lose sometimes you prefer to lose because the opponent is better but we feel like we deserved to go through like Egypt.

“But it is football and we have to accept it.”

‘I don’t want to talk about my contract’

Beaumelle took charge of Ivory Coast in March 2020, having been assistant when the side won the 2015 Nations Cup on penalties.

The Elephants had previously lost two finals on spot-kicks, against Egypt in 2006 and Zambia in 2012, and were also knocked out of the 2019 tournament on penalties by Algeria in the quarter-finals.

The West Africans have failed to qualify for the 2022 World Cup, having been eliminated by Cameroon in November, yet Ivory Coast but will host the next Nations Cup in 2023.

Beaumelle says it is “too early to talk about” their potential challenge on home soil next year but believes his side have “a great future”.

Meanwhile, the 43-year-old remains unsure of his own future.

“In my mind I am still in the game and I need two or three days to cool down and we’ll see what is going to happen.”