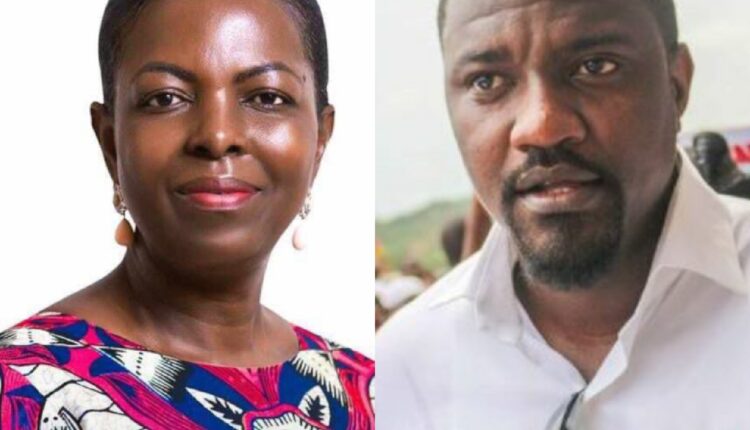 John Dumelo is a master of the screen. If Ghana had a Hollywood version of a hall of fame, his face may be among the divas.

But screen success does not translate into electoral accomplishment.

A number of entertainers, particularly actors, actress, and musicians have found the switch from their acts to political debates and campaigns two very distinct fields.

Evidence abounds that screen success and being admired by movie enthusiasts does not necessarily translate into votes.  The results of some of those who had the courage to venture out into the divisive political terrain have found to their amazement that perhaps, their audiences would prefer them to be behind their screens and not in the direct faces.

But will the smooth-talking Dumelo’s case be different?

After all, some of his counterparts in the United States and Nigeria have made that transition.

Certainly, the most famous performer-turned-politician in history, actor Ronald Reagan, became the President of the United States in 1981 after serving as the Governor of California.

In Africa’s most populous country, Nigerian movie star, Desmond Elliot,  won his bid to represent the people of Surulere constituency as their Member of Parliament.

With less than three months to the December polls, the National Democratic Congress(NDC) is counting on actor-cum-farmer, Dumelo, to wrestle the seat the party has not been able to win since 2000.

Ahead of the December 7, voters in the largely bourgeois Ayawaso West Wuogon constituency face two questions: Whether to give Lydia Alhassan, who they elected in a January 2019 by-election, a second chance or replace her with the actor, who is a political neophyte.

Dumelo, whom some describe as a charismatic smoothie with a sly sense of humour and a master of charm offensive,  started his campaign in the halls of the University of Ghana.

Stunned female students had a rare opportunity to hug and peck him—an act he is used to in front of the cameras.

By courting his female fan base in the university, Mr Dumelo is hoping his huge popularity will tilt the scale in his favour.

The University of Ghana is a huge battleground for any candidate who wants to win the Ayawaso West Wuogon constituency. With more than 50,000 voters in its belly, every politician angles for their votes.

In the last 20 years, however, the academics and the students have pledged their loyalty to the New Patriotic Party (NPP), albeit unofficially.

But 2020 seems different. Thousands of students who register in the constituency could not do so as COVID-19 forced the government to shut down the university.

Ahead of the elections. Dumelo has done all the things conventional politicians do.

He has visited homes, donated COVID-19 relief items, preparing food with vendor plaited the hairs of his constituents, gave more hugs than he ever gave in his acting career and also got excavators to desilt a drain in the constituency, courting a reprimand from the Ayawaso West Municipal Assembly.

But his soft-spoken opponent has also been busy with donations. When a recent fire wiped out a slum in Shiashie, a community popularly known as kiosk estate, she rallied support for them.

In the early days of coronavirus, almost every hall in the University of Ghana had sanitisers courtesy of the generosity of the two contenders.

Both aspirants have been working hard at outdoing each other in the “freebies” contest.

Mr Dumelo is upbeat about his chances, projecting to win with a 54% vote margin in a constituency largely regarded as the waterloo for the NDC in recent elections.

Besides his popularity, Mr Dumelo also carries a dirty political laundry—one that his opponents have always washed in pubic for him.

His attempt to respray a state vehicle allegedly sold to him irked even supporters of his own party.

His recent infamous interview on an Accra-based radio station in which he used economic jargons “micro and macro” to describe the support base of the NDC, did not go down well with many listeners. Some suggests that the interview has not done him favours and was trolled on social media for days.

Some also point to his assertion that the NDC does not “deal with intellectuals” in the said interview has undone many of his hard work.

They point to the fact that the foremost University in Ghana, the cradle of intellectualism and the centre of training of intellectuals, which, unfortunately for Dumelo, is situated within the very constituency he is vying for to represent,  his intellectual comments and interpretation was a slap in the faces of all the academics and fine brains they school has produced.

For those who argue against Dumelo, “his intellectual comment” and his allusion to that group as those that are not attracted to the NDC is enough grounds for voters within that enclave to punish him.

Others say, his statement is the sad truth. And in any case, the Legon campus has never voted to the NDC anyway, so that is to be expected.

However, the numbers from Legon is a huge factor in December polls.

Even more, to be worried about is whether his constituents will take an actor serious. Apart from Fritz Baffuor who won the Ablekuma South Constituency in 2008, entertainers have found the political grounds slippery.

Dr. Francis Napoleon K. Kumah of the National Convention Party (NCP), a party which went into alliance with the National Democratic Congress won the seat. It was not much of a competition as the NPP withdraw from the parliamentary polls, citing irregularities during the 1992 presidential elections. At the time, the presidential elections were held ahead of the parliamentary polls.

The winner recorded its slimmest margin in the battle for the parliamentary seat. The difference was just 294 votes in favour of the NDC’s Rebecca Adotey.  The NPP’s Isaac Amoo sent the matter to court. But by the time the judicial process ended in his favour, Mrs Adotey had completed her full term as MP for the constituency.

Mr Amoo got his sweet revenge in 2000 when he beat the NDC’s Elvis Afriyie Ankrah(now the party’s Director of Elections) to the seat.  The difference in terms of voters was almost 6,000.

Mr Amoo joined the league of the constituency’s one-term MPs since 1992. The current Chief Staff, Akosua Frema Osei Opare, unseated him in the NPP primaries and went ahead to win the seat with more than 8,000-vote margin. Samuel Adiepena of the NDC; Ivor Kobina Greenstreet of the CPP, and Henry Haruna Asante of the PNC were also in that contest.

Ms Opare became the first person to break the first-term-MPs-exit jinx in the constituency. In that year, she defeated three men—vocal NDC communicator, Albert Kwadwo Twum Boafo; William Dowokpor, who would later become a Progressive Peoples Party (PPP) candidate in 2012, and Henry Haruna Asante of the Peoples National Convention.

When Ms Opare hanged her parliamentary gloves in 2012, Emmanuel Kyeremateng Agyarko won the seat for the NPP. But for the first time since 1996, the NDC’s Kwame Awuah Darko closed the gap to less than 2000 votes

Mr Agyarko became the second person to win the seat for the second time. This time with the widest margin in the history of the constituency—a little over 10,000 votes.

Unfortunately, Mr Agyarko could not live to complete his term. He died on November 21, 2018.

The NPP in a smart political move put his “wife” up as a candidate. The electorate swallowed the bait and voted for Ms Lydia Alhassan.

But that election was tainted with violence compelling the government to set up a committee to investigate the skirmishes that resulted in the injury of 18 people as National Security personnel stormed the home the NDC candidate, Delali Kwesi Brempong, to retrieve what they described as a cache of arms.

The NDC boycotted the elections in which Ms Alhassan won by more than 7,000 votes. The party’s excuse was the La-Bawaleshie incident.

With six results going in favour of the NPP against two for the NDC, the conclusion is obvious Ayawaso West Wuogon is not a swing constituency.

But Mr Dumelo has a contrary view.

“This is not like some Bantama seat, or a Mampong or an Ejisu seat that we know to be traditionally NPP. The Ayawaso West Wuogon is a seat we are going to win. I am not going to win it. It is the NDC that is going to win it,” he said in a recent interview.

That hope could also be because, in 2012, former President Mahama won the election in that constituency in a skirt and blouse vote. It was the first time in 16 years the NDC had won the presidential race in a constituency which covers the Airport Residential Area, Dzorwulu, Abelenkpe, La-Bawaleshie and East Legon.

The 2020 election could best be described as a referendum on the two-year tenure of Ms Alhassan, who succeeded her ‘husband.’

Victory for the NPP could be interpreted as a pat on the back of the NPP candidate whose tenure has seen the facelift of a number of roads in the constituency.

In 2019, the NPP was accused of propping up the widow of a dead MP in a delicate twirl in a plot to win sympathy votes.

With the NDC deploying one of its poster boys in Ayawaso West Wuogon and the sympathy votes out of the way, the results of the constituency election might just be the litmus test for other entertainers lacing their boots for a race on the political track.

Can John Dumelo clear that hurdle?