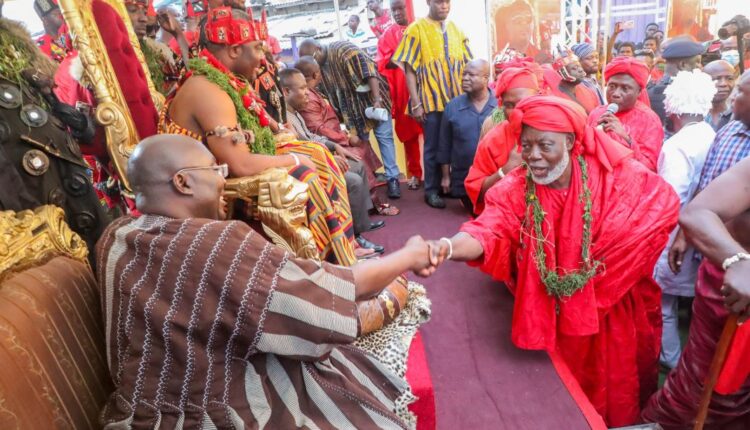 Vice President Dr. Mahamudu Bawumia has made this year’s Homowo celebration a memorable one as he joined the Chiefs and people of Ga State (Ga Mashie) to celebrate the festival.

He declared his unflinching support for sustainable development and a united Ga state on the occasion of the 2022 Homowo festival celebration.

Dr. Bawumia was received by enthusiastic celebrants at the palace of the Sempe chief as he went round to pay homage to some key traditional leaders who were celebrating the festival before making it to the palace of the cradle of the Ga people.

In brief remarks to the Sempe chief and his people, Dr. Bawumia started with the usual Homowo greetings of ‘Afi oo afi’ before explaining the purpose of his visit; to pay homage to the chiefs and people of the Ga State, saying “it is a beautiful festival and our Chiefs are the custodians of our tradition and this is why on behalf of the government and our party I’m here to pay homage to all the key chiefs in the Ga state.”

He encouraged the traditional leadership headed by the Sempe Mantse to keep up with the good initiatives being undertaken in the area, with a pledge to be a partner in that regard.

He gave meaning to that pledge by making a cash donation to support the reconstruction of the Sempe Mantse’s palace, and also presented assorted drinks to support the festivities.

The occasion was also graced by the National Chief Imam of Ghana, Sheikh Usman Nuhu Sharubutu, and some members of the Diplomatic Corps.

The traditional priest of Sempe later prayed for the Vice President, asking God to grant his heart’s desires.

The Ga people celebrate Homowo which is translated as ‘hooting at hunger’ in remembrance of a devastating famine arising from a drought that occurred in their history in pre-colonial Ghana. The festival starts in August with the planting of crops (mainly maize and yam) before the rainy season starts.

During this period, noise-making is prohibited or banned since it is believed that it will hinder the maturity of the crops.