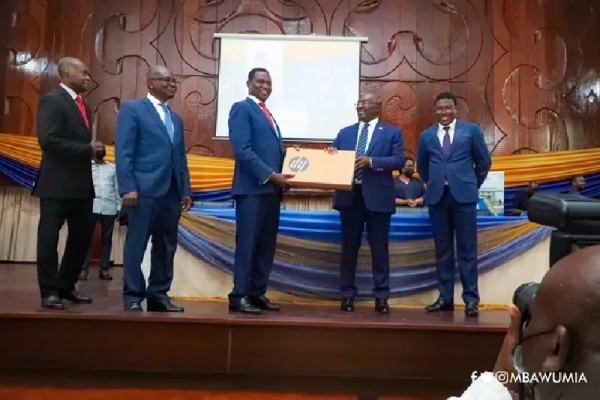 The Vice President, Dr Mahamudu Bawumia, has presented one hundred (100) laptops to the University of Ghana Business School.

The donation was in fulfilment of a pledge the Dr Bawumia made to the UGBS earlier in the year to support the School’s One Student, One Laptop initiative announced by the Vice-Chancellor of the University of Ghana,  to advance digitisation on campus.

Presenting the 100 laptops during the launch of the 60th Anniversary celebration of the UGBS on Wednesday, Dr Bawumia said he was touched and inspired by the bold initiative, hence his decision to donate the laptops to support the initiative.

“I was so inspired that that day I promised 100 laptops to the university of Ghana business school, and by the grace of God, I am presenting the laptops to the School today,” Dr Bawumia said.

The Vice President noted that more laptops would be needed to make the initiative successful, and he, therefore, called for support, especially from UGBS alumni, to donate laptops towards the campaign.

While congratulating the UGBS on attaining 60 years, Dr Bawumia commended the School, whose alumni, he said, are contributing significantly to the development of the nation.

As part of its 60th Anniversary celebration, the UGBS has lined up a year-long activity.