The BBC had to replace live broadcasts with recorded material on its TV news channels for about an hour on Wednesday following a technical glitch.

The News at Six and News at Ten were also presented from the BBC’s Millbank studio instead of the usual facilities at New Broadcasting House.

The issue affected OpenMedia, a new computer system rolled out across BBC News outlets over the past six months.

OpenMedia supplier Annova has been helping to investigate the fault.

Engineers believe they have now addressed the problem.

BBC News Home Editor Mark Easton shared on social media that he was rushing across London to the Millbank studio.

The location, which has a large angular desk rather than the usual round one, is used for the daily Politics Live programme.

The BBC website has been unaffected by the issue. 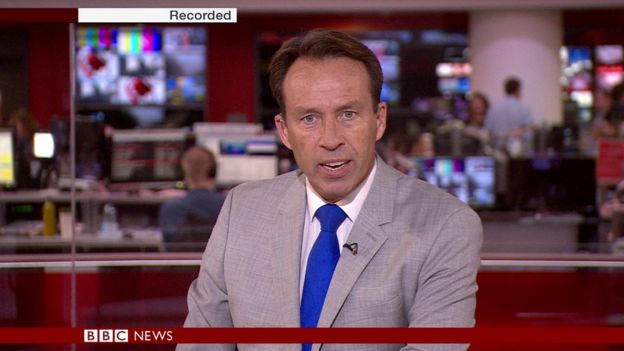 From about 15:00 BST, the BBC News Channel and BBC World News were unable to broadcast live, relying instead on recorded material.

OpenMedia was designed to make it easier for reporters and other staff to share scripts, running orders and contacts.

One of its promised benefits is to provide “stability and reliability”.

BBC News has faced problems with the introduction of new technology in the past, including robot-operated cameras that refused to stay centred on presenters.