The Supreme Court has for the second time adjourned all its cases scheduled for June 15, 2020.

The legal team, applicants, media persons and other patrons of the court were waiting in anticipation for proceedings to begin.

But that was not to be as one of the court workers announced an adjournment of Bernard Mornah’s contempt case.

All other cases for the day adjourned to July 22 and July 29, respectively.

The Chairman of the People’s National Convention (PNC), Bernard A. Mornah, has been cited for contempt after he allegedly encouraged Ghanaians to disregard a Supreme Court order for the Electoral  Commission to compile a new voters’ register pursuant to C.I 126 which excluded the old voters’ ID cards as a basis for identification.

According to him, “people who are already Ghanaians are already registered are going to be taken out of the voters’ register. Don’t think confusion will not come at the registration station and if confusion comes there, you think the EC staff will be safe, we will beat each other there and, we will kill each other there if that is what the EC wants to lead this nation to.”

The contempt suit filed at the Supreme Court by the Deputy Attorney General, Godfred Yeboah Dame, alleged that Bernard Mornah called on Ghanaians to go out there with their old voters’ cards if it is the only form of identification they have and demand their right to be registered.

This directive, the deputy AG noted contradicts the express orders of the court for the old cards to be excluded from the list of documents for identification.

The official documents accepted for the registration exercise is the new Ecowas Ghana card and a valid passport.

The office of the Attorney General by this suit has urged the Supreme Court to commit Mornah to prison to serve as a deterrent and maintain trust and dignity in the highest court of the land.

He was invited by the Criminal Investigations Department (CID), prior to Wednesday’s court hearing.

The Supreme Court, in its judgement,  on June 25, 2020, took the commission’s side and affirmed that the electoral body can go ahead with the exercise slated for June 30, 2020.

The seven-member panel presided over by the Chief Justice, Anin Yeboah, in a unanimous decision, also ordered the EC to compile a new register pursuant to Constitutional Instrument 126 (C.I. 126) which was passed by Parliament recently.

The court subsequently ordered all stakeholders and Ghanaians eligible to vote to comply with Articles 42 and 45 of the Constitution and C.I 126 in the compilation of the new register.

Below is the list of cases scheduled for July 15 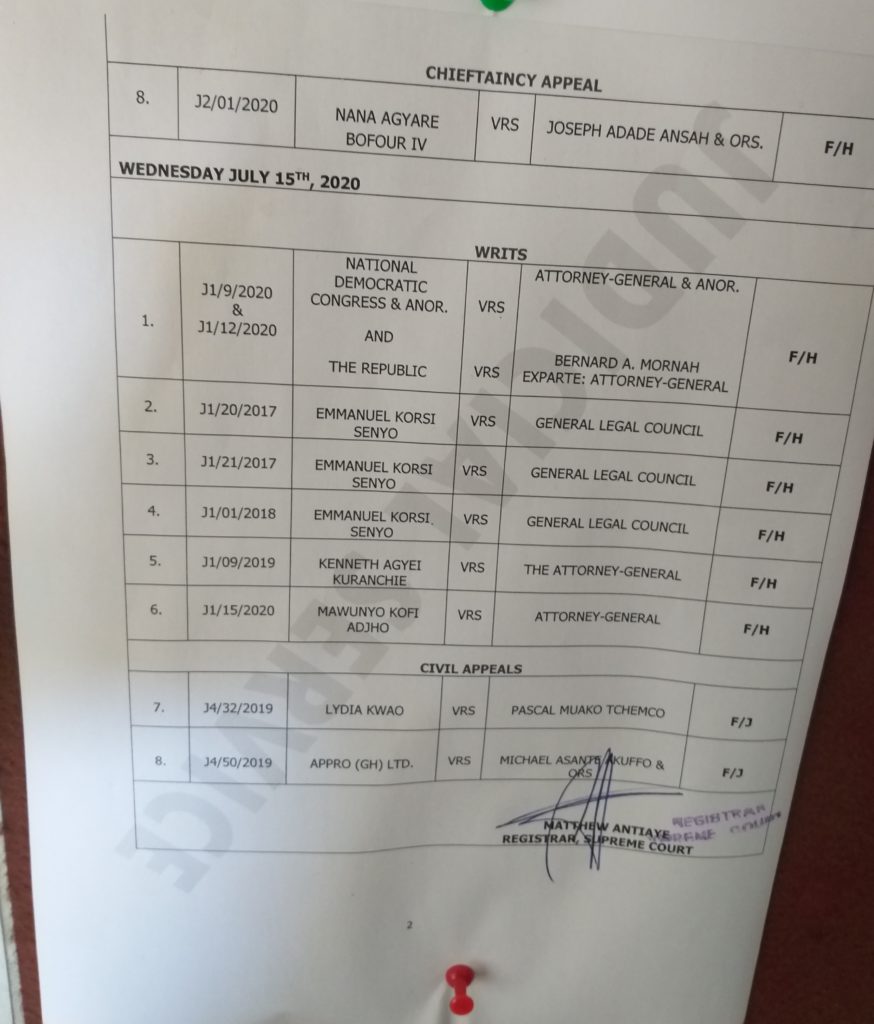 Why Ernesto Yeboah was sacked from CPP