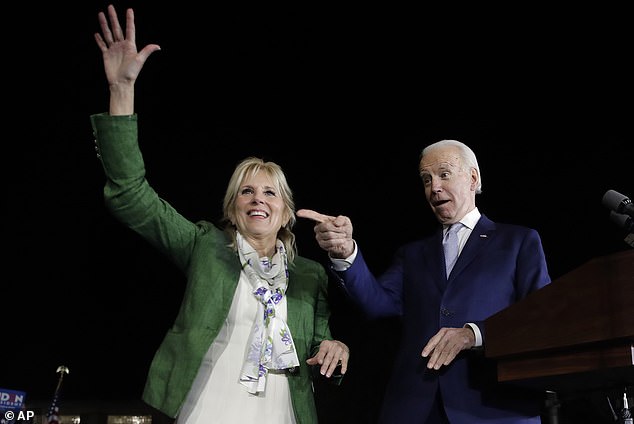 Joe Biden has been officially anointed the Democratic presidential candidate at the party’s convention, helped over the line with some glowing testimonials from elder statesmen.

The convention is largely virtual, amid the coronavirus pandemic, and it is unclear whether a format of pre-recorded speeches and no live audience will generate the same levels of enthusiasm as the traditional party gatherings. Next week’s Republican convention will also be mostly online.

The opening night drew 28% fewer viewers than in 2016, according to ratings from Nielsen, a global measurement and data analytics company.

Mr Biden, the former vice-president under President Barack Obama, became his party’s nominee on Tuesday night in a pre-recorded roll call vote from delegates in all 50 states.

This is Mr Biden’s third White House bid, having formerly run in 1988 and 2008. The 77-year-old’s campaign appeared to be in danger of collapse back in February this year.

On the second night of the party convention on Tuesday, with the theme “leadership matters,” Mr Clinton delivered the key address.

“Donald Trump says we’re leading the world,” Mr Clinton said in his five-minute message pre-recorded from his home in Chappaqua, New York. “Well, we are the only major industrial economy to have its unemployment rate triple.

“At a time like this, the Oval Office should be a command centre. Instead, it’s a storm centre. There’s only chaos.”

Mr Powell said Mr Biden shared “the values I learned growing up in the south Bronx and serving in uniform”.

The decorated four-star general said he supported him for president because “we need to restore those values to the White House”.

In June, Mr Powell – who served under President George W Bush and has appeared at multiple Republican conventions in previous years – called President Trump a liar and endorsed Mr Biden.

He joins several Republicans who have endorsed Mr Biden, including former Ohio Governor John Kasich during the first night of the convention.

Cindy McCain, the widow of Republican Senator John McCain, also spoke about the friendship between her late husband and Mr Biden, though she stopped short of a formal endorsement.

“When this president goes overseas, it isn’t a goodwill mission, it’s a blooper reel,” he said.

“He breaks up with our allies and writes love letters to dictators. America deserves a president who is looked up to, not laughed at.”

The freshly minted Democratic nominee’s wife, Jill Biden, potentially the next US first lady, delivered the night’s headline address, standing in an empty classroom at the Delaware high school where she taught English in the 1990s.

Urging everyone to vote for her husband, who joined her, she said: “The burdens we carry are heavy, and we need someone with strong shoulders.

“I know that if we entrust this nation to Joe, he will do for your family what he did for ours: bring us together and make us whole.”