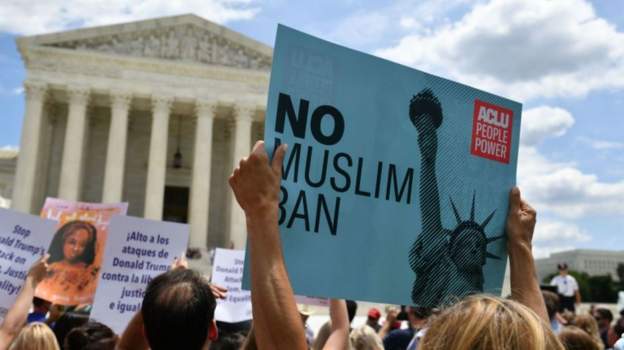 US President Joe Biden has begun to undo some of Donald Trump’s key policies, hours after being sworn in, including ending the travel ban on some majority-Muslim countries.

His proclamation said that the US “was built on a foundation of religious freedom and tolerance, a principle enshrined in the United States Constitution”.

“Nevertheless, the previous administration enacted a number of executive orders and presidential proclamations that prevented certain individuals from entering the United States – first from primarily Muslim countries, and later, from largely African countries.

“Those actions are a stain on our national conscience and are inconsistent with our long history of welcoming people of all faiths and no faith at all.”

Mr Trump signed a controversial travel ban just seven days after taking office as US president in January 2017, arguing it was vital to protect Americans.

People from Iran, Libya, Somalia, Syria, Yemen, Venezuela, and North Korea were banned from obtaining any kind of visa. Chad was taken off this list in 2019. Last February, citizens of six more countries were barred from obtaining certain types of visas, including those from Eritrea, Nigeria, Sudan, and Tanzania.

“They have jeopardised our global network of alliances and partnerships and are a moral blight that has dulled the power of our example the world over. And they have separated loved ones, inflicting pain that will ripple for years to come. They are just plain wrong.”

But the new president said the US would still take threats to the country seriously.