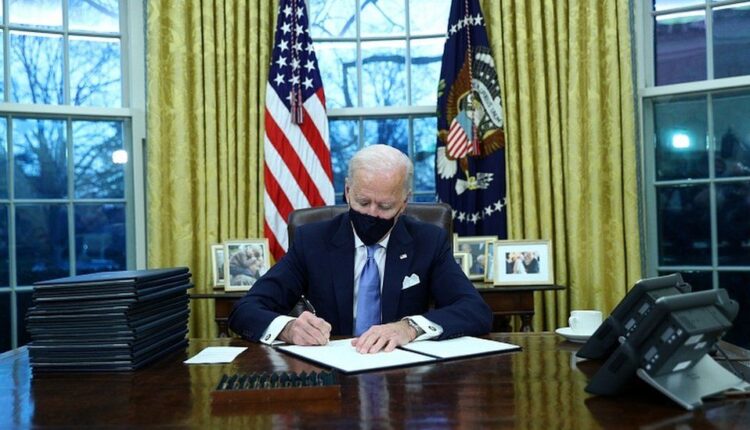 US President Joe Biden has begun to undo some of Donald Trump’s key policies, hours after being sworn in.

In his initial acts as the 46th US president, he signed 15 executive orders – the first to boost the federal response to the coronavirus crisis.

Other orders reversed the Trump administration’s stance on climate change and immigration.

President Biden set to work at the Oval Office having been sworn in earlier on Wednesday at the US Capitol.

The inauguration was unlike any other due to coronavirus restrictions, with few present to witness the oaths and ceremonies.

Donald Trump – who has still not formally conceded the presidency to Mr Biden – snubbed the event in a departure from longstanding precedent.

What orders has Biden signed?

“There is no time to waste when it comes to tackling the crises we face,” President Biden tweeted as he headed to the White House following his inauguration.

President Biden “will take action – not just to reverse the gravest damages of the Trump administration – but also to start moving our country forward,” a statement detailing his executive orders said.

On coronavirus, a series of measures will be enacted to tackle the pandemic which has claimed more than 400,000 lives in the US.

There will be a mandate to wear masks and practise social distancing on all federal government property.

A new office will be set up to co-ordinate the response to the pandemic and the US will halt the process – begun by the Trump administration – of withdrawing from the World Health Organization (WHO).

The move to re-engage with the WHO was welcomed by UN Secretary-General Antonio Guterres who said it was “absolutely critical” for a more co-ordinated global response, his spokesman Stéphane Dujarric said.

Mr Biden has also pledged to make the fight against climate change a top priority of his administration.

He signed an executive order beginning the process of rejoining the 2015 Paris climate agreement, from which Mr Trump formally withdrew the US last year.

Mr Biden’s climate envoy, former US Secretary of State John Kerry, tweeted that the commitment set “a floor, not a ceiling” for America’s climate leadership and urged international co-operation ahead of the UN Climate Change Conference (Cop26) in Glasgow in November.

Today, @POTUS rejoined the Paris Climate Agreement, restoring America’s credibility and commitment — setting a floor, not a ceiling, for our climate leadership. Working together, the world must and will raise ambition. It’s time to get to work – the road to Glasgow begins here.

Mr Biden has also revoked the presidential permit granted to the controversial Keystone XL Pipeline, which environmentalists and Native American groups have fought for more than a decade.

The privately financed pipeline – estimated to cost about $8bn (£5.8bn) – would carry about 830,000 barrels of heavy crude a day from the oil sands of Alberta, in Canada, to Nebraska.

Barack Obama vetoed a bill approving construction of the pipeline in 2015 but the decision was overturned by President Trump.

On immigration Mr Biden has revoked the Trump administration’s emergency declaration that helped fund the building of a wall along the Mexican border and also ended a travel ban on some majority-Muslim countries.

This is the (relatively) easy part

Joe Biden and his presidential team have had nearly three months to plan out his first actions upon taking the oath of office. Donald Trump had used his executive authority broadly, to advance large swaths of his political agenda, so how – and when – Biden would begin undoing those actions would have particular importance.

It didn’t take long for the newly inaugurated president to show his hand. He targeted, in particular, some of the most controversial portions of Trump’s agenda.

Executive action is the (relatively) easy part, however. For Biden to make lasting change – policies that can’t be undone by future presidents – he will have to work with Congress to pass legislation on issues like pandemic relief, citizenship for undocumented migrants, healthcare reform and voting-rights protections.

With Democrats in control in the House of Representatives and Senate, Biden has a window for accomplishments, although it will require surmounting Republican procedural obstacles and keeping his party in line. The president’s decades of experience as a legislator could come in useful.

Biden calls for unity – it won’t be easy

At the first news conference of the Biden presidency, press secretary Jen Psaki was asked if her priority was to promote the interests of President Biden, or provide “the unvarnished truth”.

She said she had “deep respect for the role of a free independent press” and that she would join the president in bringing “transparency and truth back to government”.

President Trump – and his press secretaries – often had a combative relationship with the media.

What happened at the inauguration?

“Democracy has prevailed,” President Biden said after taking the oath of office with Chief Justice John Roberts on stage in front of the US Capitol.

Delivering a message of unity after the turbulent Trump years, he promised to be a president “for all Americans” – including those who voted against him.

Three of his predecessors attended the ceremony: Barack Obama – under whom Mr Biden served for eight years as vice-president – Bill Clinton and George W Bush, as well as Mr Trump’s vice-president, Mike Pence.

Kamala Harris was sworn in as vice-president ahead of Mr Biden. She is the first woman – and the first black and Asian-American person – to serve in the role.

There was extra-tight security for the ceremony after the US Capitol was stormed by violent pro-Trump protesters on 6 January.

Mr Biden and First Lady Jill Biden, together with Ms Harris and her husband Doug Emhoff, then walked down Pennsylvania Avenue to the White House, greeting friends and supporters.

The inauguration ceremony included musical performances by Lady Gaga – who sang the national anthem – as well as Jennifer Lopez and Garth Brooks.

What about Donald Trump?

Mr Trump was the first president not to attend his successor’s inauguration since 1869. He left the White House early on Wednesday, and flew to the nearby Andrews Air Force base.

In his farewell address at the base, he highlighted what he regarded as the successes of his presidency. “What we’ve done has been amazing by any standard,” Mr Trump said.

The 74-year-old then left for his Mar-a-Lago golf club in Florida, where he arrived later in the morning.

In his last hours as president, Mr Trump granted clemency to more than 140 people, including his former adviser Steve Bannon, who had been facing fraud charges.

The political drama surrounding Mr Trump is far from over. The US Senate is expected to put him on trial soon, following his record second impeachment by the House of Representatives for allegedly inciting the Capitol riot.

On Tuesday, the Senate’s Republican leader, Mitch McConnell, said the mob had been provoked by Mr Trump and fed lies.