Black people in UK ‘nearly twice as likely to die’

Black men and women are nearly twice as likely to die with coronavirus as white people in England and Wales, according to the Office for National Statistics.

The analysis shows the inequality persists after taking into account age, where people live and some measures of deprivation and prior health.

People from Indian, Bangladeshi and Pakistani communities also had a significantly higher risk of dying. 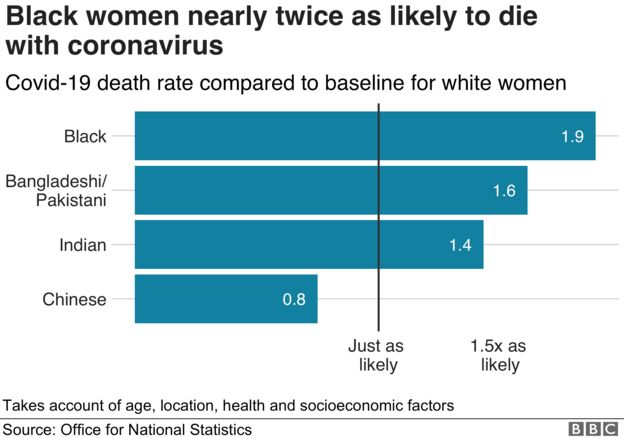 The government has launched a review into the issue.

The analysis by the ONS combined data on deaths involving Covid-19 with information on ethnicity from the 2011 census.

Taking into account age, location and some measures of deprivation, disadvantage and prior health, it found black people were 90% more likely to die with Covid-19 than white people.

Men and women from Indian, Bangladeshi and Pakistani communities had an increased risk of between 30% and 80%, the analysis found.

Robert Cuffe, the BBC’s head of statistics, said the analysis cannot fully explain the reasons for the higher risk, because it does not take into account people’s current health, whether they are in crowded living conditions, whether they are exposed to the virus through front-line roles – or other differences between communities that can increase risk.

‘Action must be taken’

The ONS suggested some of the risk might be caused by other social and economic factors that are not included in the data.

And it said that some ethnic groups may be “over-represented in public-facing occupations” and so more at risk of being infected while at work.

The ONS plans to examine the link between coronavirus risk and occupation.

Without taking into account factors such as prior health and location, the analysis found black people were more than four times as likely to die after contracting the virus.

After factoring in these issues, the death rate among black men and women was 1.9 times as high as white men and women. For Bangladeshi and Pakistani men the risk was 1.8 times higher, and for women in those communities it was 1.6 times higher.

“It is urgent the causes of this disproportionality are investigated. Action must be taken to protect black men and women – as well as people from all backgrounds – from the virus,” the Labour MP for Tottenham said on Twitter.

Research by the Health Foundation found that ethnic minority workers were more likely to be doing jobs that carried a high risk during the pandemic.

It found that in London, while black and Asian workers made up 34% of the overall working population, they represented 54% of workers in food retail, 48% of health and social care staff, and 44% of people working in transport.

Tim Elwell-Sutton, assistant director at the Health Foundation, said a forthcoming government review of the impact of the virus on different groups must consider “how deep-rooted discrimination and socioeconomic disadvantage are placing some people at increased risk”.

Indonesia set to punish sex before marriage with jail time