Black Stars land in Sudan ahead of 2021 AFCON qualifier

The Black Stars of Ghana have safely arrived in Sudan ahead of their 2021 Africa Cup of Nations qualifier against Sudan.

The team departed from Ghana on Sunday for the return leg encounter against Sudan, after securing a 2-0 victory at Cape Coast Stadium.

Black Stars are currently on top of Group C which is made up of Sudan, South Africa, as well as Sao Tome and Principe.

The team touched down in Omdurman in the early wee hours of the morning and headed straight to their hotel.

Dauda, who has been out of the team for the last three years was given the surprise call up after number goalie Ofori was ruled out of the next game after picking up his second yellow card in the qualifiers on Thursday against Sudan at the Cape Coast Stadium ruling him out of the 2nd leg. 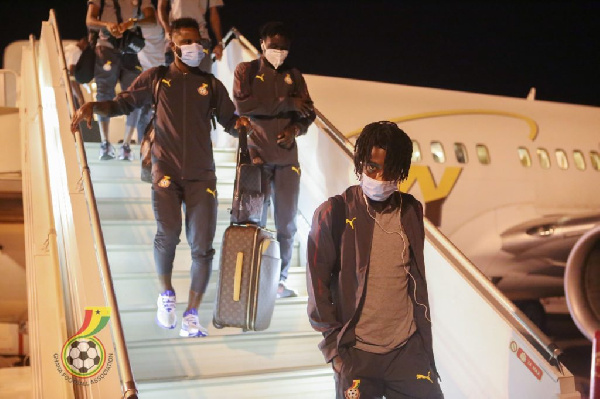 The traveling party of Ghana has players, coaches, and the management committee led by its chairman, Mr. George Amoako.

Below are the players that made the trip:

Sudan will host Ghana on Tuesday, November 17, in a matchday four tie at Omdurman, Khartoum.

Making a positive difference for women: Working together is the panacea