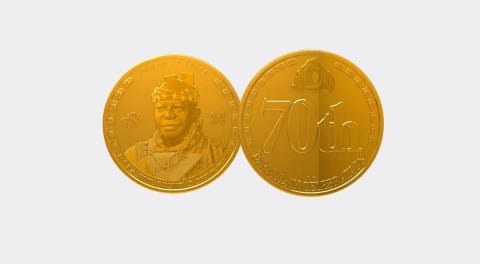 The Bank of Ghana (BoG) has approved the issuance of gold coins to commemorate the 20th-anniversary celebration of the Asantehene Otumfuo Osei Tutu II, theghanareport.com has learned.

The coin is expected to be 100% 24 carat gold with a proposed weight of at least 31g and a diameter of 37mm, a source has explained.

The commemorative gold coins is expected to be auctioned to the public and proceeds used to fund the establishment of a Cultural Resource Center.

The Asantehene is the Chancellor of the Kwame Nkrumah University of Science and Technology (KNUST). Otumfuo Osei Tutu II is the Grand Patron of the Grand Lodge of Ghana and the Sword Bearer of the United Grand Lodge of England.

His 20th-anniversary commemoration was held on April 21, 2019, at the Dwabirem of the Manhyia Palace.

This was at the grand durbar of the Akwasidaekese. Dignitaries like President Nana Addo Dankwa Akufo-Addo; Vice President of Suriname, Michael Ashwin Satyandre Adhin and the Awomefia of the Anlo state, Torgbui Sri were in attendance.