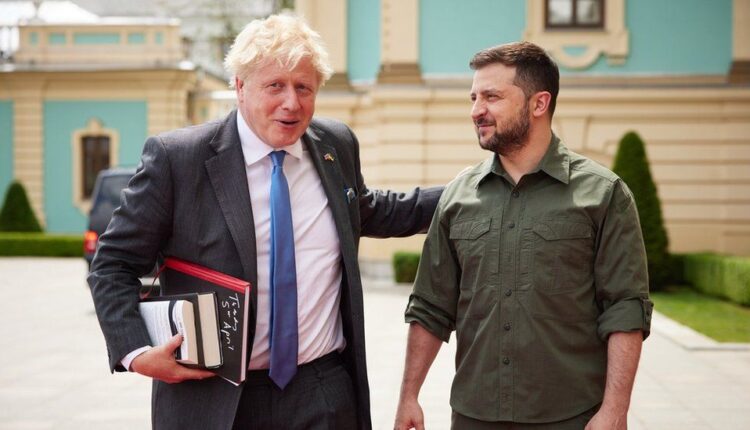 Prime Minister Boris Johnson has travelled to Kyiv, to have talks with Ukrainian President Volodymyr Zelensky.

During the visit, Mr Johnson offered a UK-led military training programme which he said could “change the equation of the war”.

Downing Street says the operation would have the potential to train up to 10,000 soldiers every 120 days.

This is the prime minister’s second visit to Ukraine since the Russian invasion in February.

Mr Johnson announced his visit by tweeting a picture of himself with the Ukrainian president with the message: “Mr President, Volodymyr. It is good to be in Kyiv again.”

Mr Zelensky’s Telegram account posted a message saying: “Many days of this war have proved that Great Britain’s support for Ukraine is firm and resolute.

Downing Street said the UK was offering a training programme which would help Ukraine “accelerate their deployment, rebuild their forces, and scale-up their resistance”.

As part of the course, the government says the soldiers would learn “battle winning skills for the front line, as well as basic medical training, cyber-security and counter explosive tactics”.

If the offer is accepted by Mr Zelensky there would be discussions about the size of the training operation, which is expected to take place outside of Ukraine.

No 10 said the leaders also discussed how the UK could “play a pivotal role in ending the blockade of grain”.

Mr Johnson said the purpose of his visit was “to send a clear and simple message to the Ukrainian people: the UK is with you, and we will be with you until you ultimately prevail”.

“Two months on from my last visit, the Ukrainian grit, determination and resilience is stronger than ever, and I know that unbreakable resolve will long outlive the vain ambitions of President Putin.”

The prime minister had been due to appear at a conference held by a group of his Tory MPs in Doncaster, but cancelled the visit to travel to the Ukrainian capital instead.

Leader of the group of MPs, Jake Berry, told the BBC that it was “not a snub” that the PM pulled out of the Northern Research Group conference.

He said: “He is prime minister of our United Kingdom. Things happen that mean that plans have to change.”