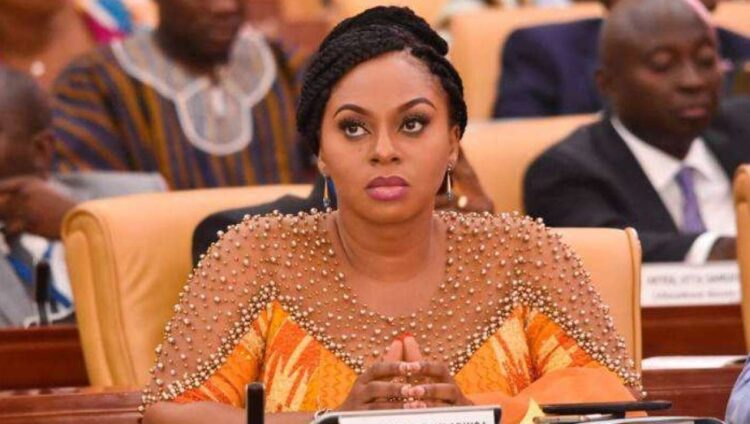 The Director of Communications at the Presidency, Eugene Arhin, stated in a press release on Thursday, 28 July 2022, that Ms Safo will no longer be a part of President Akufo-Addo’s government.

“In accordance with article 81 (a) of the Constitution, the President of the Republic, Nana Addo Dankwa Akufo-Addo, has revoked the appointment of Hon, Sarah Adwoa Safo, Member of Parliament for Dome Kwabenya, as Minister for Gender, Children and Social Protection, with immediate effect”. 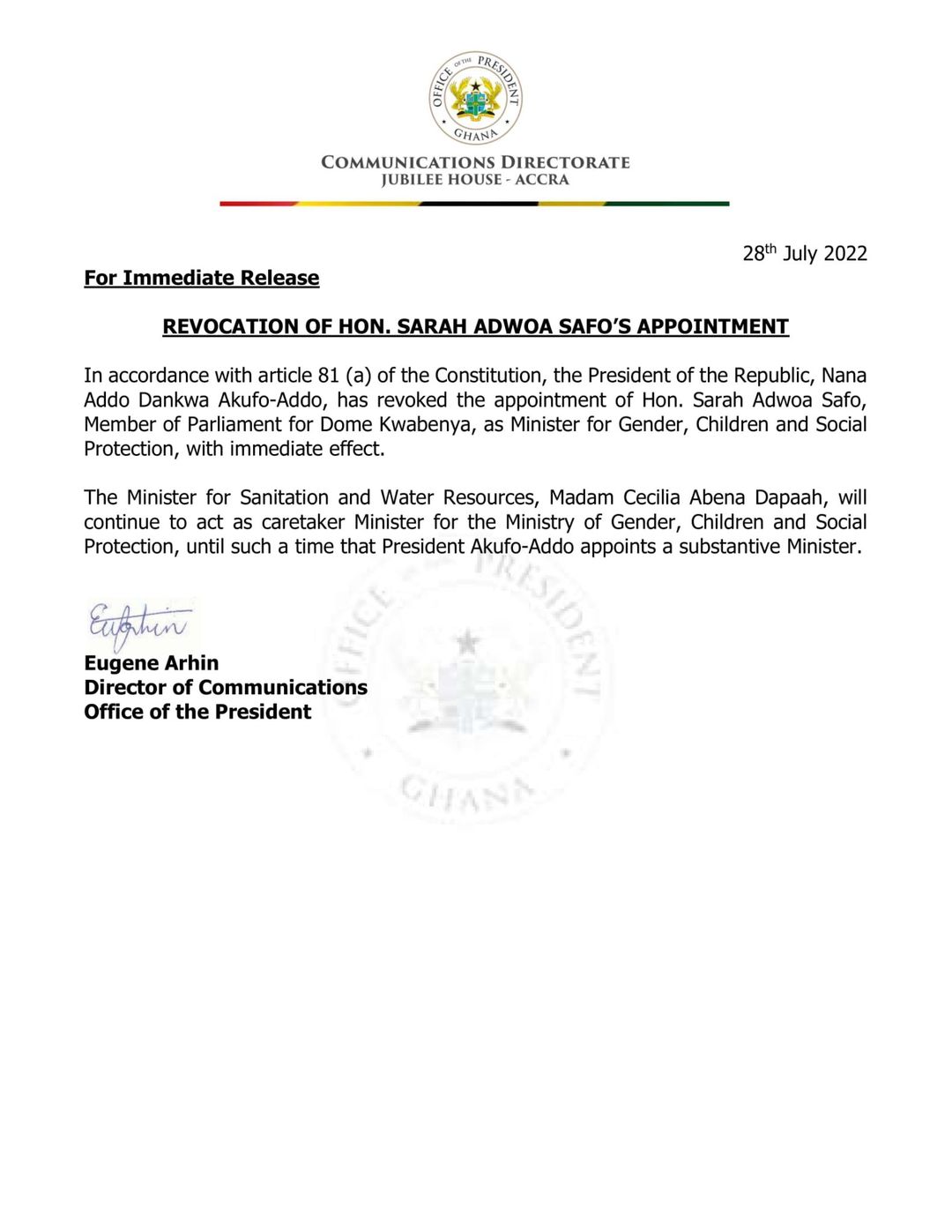 The decision to relieve Ms Safo from her duties as a minister came a few hours after parliament was compelled to adjourn a heated debate on whether to kick her out and vacate her seat for absenteeism.

The Speaker of Parliament, Alban Bagbin, was expected to deliver a verdict on Ms Safo’s fate after missing 15 parliamentary sittings, an act which flouts parliament’s standing orders.

The Majority MPs urged the speaker to declare the Dome Kwabenya seat vacant, while the Minority jumped to the defence of the absent MP, saying she still needed to be given a chance to explain herself.

After hearing constructive criticisms from both sides of the house, the speaker said he needed time to prepare a detailed submission since this would set a precedent for cases related to future absentees.

“I have consulted the old lady, the old lady has given me some advice, and I think that advice is correct. I need time to submit to this house a reasoned written ruling.

“I cannot, in the haste of today, give you a ruling. In the circumstances, I will urge this house to call it a day. On return, I will deliver a written ruling,” he said to a divided house.

The issue of absenteeism came to light after a former MP for Kumbungu, Ras Mubarak, petitioned the Speaker in March 2022.

He said the MPs had flouted provisions of Article 97 (1) (c) of the Constitution and Parliament’s Standing Order 16 (1), which frowns on members absenting themselves for 15 sitting days without permission from the speaker.

Per Article 97(1)(c) of the 1992 Constitution, a Member of Parliament shall vacate his seat “if he is absent, without the permission in writing of the Speaker, and he is unable to offer a reasonable explanation to the Parliamentary Committee on Privileges from fifteen sittings of a meeting of Parliament during any period that Parliament has been summoned to meet and continues to meet.”

In an earlier interview, Ms Safo said she was not served to appear for a probe on absenteeism.

The legislator, who has been criticized for abandoning her ministry and parliamentary duties, said no information had officially reached her desk.

“I have served in parliament for over 12 years and a practising lawyer for 18 years. I know the rules, but as I sit here, I have not been served…No official document has come to me.

She explained that she was currently in the United States attending to pressing family issues and would return after taking care of her sick son.

“As you can see, I am here in the United States taking care of my son, and I don’t know how I am supposed to appear before the Committee. If the speaker says you have been summoned to the Privileges Committee, the Committee then sets its own modalities on when we are to appear, but I don’t have any information on that,” she said in an interview on Joy News on Thursday, 26 May 2022.

She insisted she would only return home when her son was declared fit and healthy.

On 13 July 2022, Parliament’s Privileges Committee, after completing its probe, decided to let the entire house determine the fate of Ms Safo.

The Committee indicated that on three different occasions, Ms Safo failed to honour a zoom invitation to explain her absence from parliament.

In the case of the other absentees, the Committee, by a 15-12 majority decision, determined that the excuse from Assin Central MP Kennedy Agyapong and Ayawaso Central MP Henry Quartey was tenable and, thus, they should not lose their seats.

“With Kennedy Agyapong, there were 15 votes against 12, likewise Henry Quartey. In Adwoa Safo’s case, the chair of the Committee said since she had never appeared before us, we did not vote. We have thus decided to hand her over to parliament to determine her fate,” a member of the Committee and MP for Akwatia, Henry Boakye-Yiadom, revealed.

Below is the full report submitted by the Committee:

NPP to meet Presidential aspirants over adherence to Code of Conduct