The path to success is tortuous, with endurance a virtue that leads to a glorious end for some people faced with seemingly insurmountable adversity.

The odds against great feats shrivel, as the herculean task magnifies, but some women strive to sail through cultural and societal barriers that pull them down.

With sheer determination, some have been unstoppable, overcoming everything thrown at them to rise and shine.

Despite marriage as a teenager and early childbirth that obstructed her education, Professor Sa’id returned to the classroom after nearly a decade and is currently one of few scientists specializing in atmospheric physics.

Her knowledge is a vital tool in contributions to the nuclear sciences and various policies.

In the quest to drive diversity and unearth mentors for the next generation, the Royal Society of Chemistry, UK, named Professor Sa’id as one of five female West African scientists and role models challenging societal barriers within the chemical sciences sector.

Among her honours and recognitions are:

Her advocacy and other engagements include:

To throw a spotlight on her inspirational story, Prof Sa’id shared her life experiences in an exclusive interview with The Ghana Report.

Q: What inspired you to choose a career in science?

Prof. Sa’id: When I was a child, my father wanted me to be a medical doctor.

Along the line, I started nursing the same desire.

Being a doctor was and still is a very prestigious profession, and little regard was given to the pure sciences.

So, my perception was that if I wanted to be in the sciences, then I had to become a medical doctor.

However, things took a different trajectory as I grew up in Kano, Nigeria, where I lived with my parents in a predominantly Islamic community.

Q: Tell us about the journey and how you overcame obstacles you encountered.

Prof. Sa’id: There are certain things you face in life; some you enjoy, others you endure.

After I finished secondary school, I had a break in education. I got married at 18 years, and then I had my kids.

By the time I got back to the university after almost a decade, I already had four children. I was able to sail through and finish with a Bachelor of Science in Physics at the Bayero University in 1996, even though it was very tough.

I proceeded to pursue a Master of Science in Physics at the same university and graduated in 2003.

Subsequently, I went to the University of Reading, UK, and completed with a Master of Science in Environment and Development in 2004.

From there, PhD in Atmospheric Physics, Bayero University in 2013 and currently a Professor.

Then later on, when I became a lecturer, I experienced other hurdles in my path.

Sometimes you need support, and then you may find out that you may not get that support from some of your colleagues.

Q: Were there some positives you would like to highlight?

Prof. Sa’id: This journey has also been rewarding due to support from some few colleagues and students.

As a lecturer, your students see what you do, and they appreciate it. For instance, I got the Elsevier Foundation award because I was nominated by one of my students.

I was so surprised, and I can tell you that the award gave me so much visibility and brought big opportunities my way.

Q: How do you juggle family and a time-demanding career, and how can society make it easier for women, especially in science?

Prof. Sa’id: Marie Curie was asked a similar question, and I would like to answer it just as she did.

She mentioned that it is not easy, and honestly, it has not been easy.

Some people see your successes, but they do not see the difficulties you overcame in getting there.

I got married as a young girl.

There were nights I returned from class and had to head straight to the kitchen to prepare dinner in my tired state without rest.

Other times, my children may fall sick and I cannot say because I am busy, I will not attend to them.

I always say that when you make a decision to combine these roles, then you need that spirit of sacrifice.

For us women, we seem to have that drive naturally.

And that’s exactly what I did.

Q: What does your current work entail?

Prof. Sa’id: Currently, apart from lectures where I have undergraduate students and post-graduate students, what I’m doing now is air quality monitoring in different parts of Nigeria.

I have my own scientific network currently within Kano and there are some other network stations involved in other places.

We also have an air quality monitoring team, and this is a collaborative effort with a Professor at Pennsylvania State University, Professor Gregory Jenkins.

So we have a memorandum of understanding where we have different air quality monitoring devices.

We gather all the data of particulate matter we refer to as PM 2.5 and PM 2.1, which mostly affects the respiratory health of humans and the impact of those PM 2.5 on Covid-19 cases.

We use a monitoring device called the clarity device, which is powered by solar, and that is mounted in the open.

We connect it online, and it can be easily accessed via the internet.

Currently, we are trying to publish some of our findings in a special journal of Geo Health.

I’m part of the editing team, and we have some papers lined up, which we will be publishing soon. I also continue my outreach program in mentoring young girls.

Q:  How can we encourage more girls to pursue higher education as many tend to fall off along the line?

Prof. Sa’id: I participated in one conference which was centred on raising the ambition of girls in the field of science.

During the conference, we realized that one of the major deterrents from venturing into the sciences was the anxiety about mathematics, which is core to the other science subjects.

So, we looked at the factors that cause this anxiety, and we gathered that our young girls were afraid of the maths teachers who are predominantly male.

Some of them were so harsh that the girls were so afraid. So, we advocated that a way of tackling that is to groom and bring in more female mathematics teachers.

Same thing with all the other science courses. In all the science subjects, we need a lot of role models who understand the students.

We also noted that parents had a role to play, and they must encourage the young girls and to let them know what they can do.

So that if a young girl says she wants to be a chemical engineer, for example, the parents should not say, “Oh, that’s too tough for a girl”.

Parents should take it upon themselves to be the ones to encourage the young girls.

Society should also be encouraging rather than frowning when they see some of the girls in roles that they think are male-dominated.

We must put them in the forefront where they will be visible.

The more visible they are, the more their counterparts will say, “if there are female chemical engineers, aviation engineers and scientists, then I can do it too”.

These are the ways I think we can tackle this.

Q: In what ways are you helping to groom the next generation of scientists like yourself?

Prof. Sa’id: I think mentorship is essential, and everyone needs a role model or mentor.

This is because no matter your zeal and focus, you still need someone to guide you, somebody to hold your hand, someone to keep giving you encouraging words.

In most secondary schools, for example, in Nigeria, we are advocating to have something we call the Science, Technology, Engineering and Mathematics (STEM) clubs.

They could also liaise with some non-governmental organizations outside the schools for career talks from time to time.

I undertake that on a solo basis, and also I joined some non-governmental organizations to do that.

In most schools where I reside in Kano, Northern Nigeria, towards the end of every school session, they have something called ‘Career Week’.

Mentors are invited to talk to the girls about different careers, and this is done mainly in the girls’ schools, but it could be extended to include boys’ schools.

The girls will marry the boys once they grow up. So, if you fail to carry the boys along, then the boys will now become obstacles in their academic and career pursuits.

So we need to mentor both the boys and the girls. 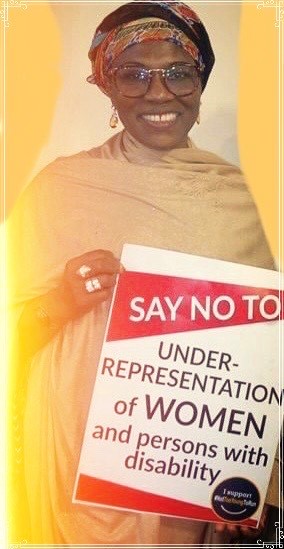 In one of my encounters, I went to a secondary school in Kano.

After giving them the talks and they were gingered up, one of them stood up and said:

“Professor, please, I would want you to organize another talk similar to the one you have just given us, but this time around, invite our parents. We are going to finish secondary school. Some of us are 16, 17, others 18, and our parents want us to get married as soon as we finish school. So in spite of how much enthusiasm you have raised, our parents may still decline, and that would be an obstacle.

So I would really want you to talk to our parents.”

So, I asked the school to put together something similar since they have a parent-teacher association.

Then, we can have the parents to also get involved.

Just like I said, it is something that has to be holistic. Everyone has to believe in it. That is when we can achieve success. It may be slow now, but we will get there.

Q: What will be your advice to young people, especially those that aspire to rise to the level you’ve gotten to and beyond?

Prof. Sa’id: My advice will be that they should first identify what they want to do and their interests.

They should make sure they learn what is needed in the fields that they have chosen and really study hard.

In a male-dominated field, girls may face obstacles.

Some male colleagues would want to ask them, “what and what do you know?” and as soon as they start to fumble, they will conclude and say, “ you see, girls cannot do it”, and that’s what we want to avoid.

You must be able to stand and face the person who says you cannot do it, and the only way is to know what to say. These are the things that kept me.

Before I go for a presentation, especially if I know I’m going to face male colleagues and superiors, I will make sure I read everything, including the ones you think they might not ask.

Then I go and deliver my presentation confidently and answer every question.

When you do this, they will be stunned, and they cannot say, “you can’t do it”.