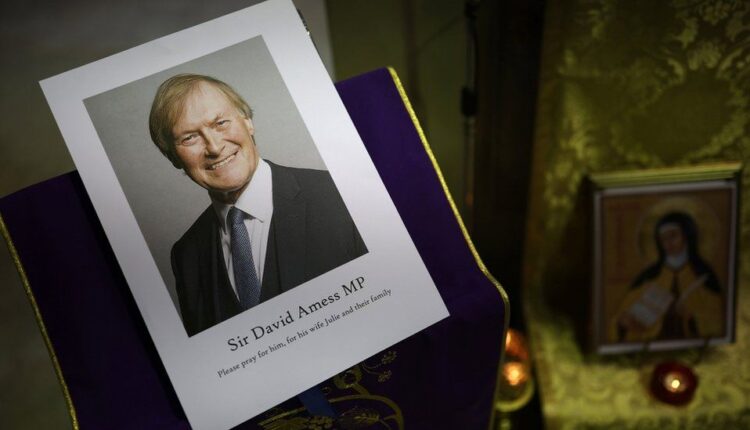 Conservative MP Sir David Amess has died after being stabbed multiple times at his constituency surgery in Essex.

Police said a 25-year-old man was arrested on suspicion of murder after the attack at a church in Leigh-on-Sea.

They recovered a knife and are not looking for anyone else in connection with the incident. A counter-terrorism team will lead the investigation.

Boris Johnson has spoken of his shock and sadness at the loss of “one of the kindest” people in politics.

Sir David, 69, had been an MP since 1983 and was married with five children. He is the second serving MP to be killed in the past five years, following the murder of Labour MP Jo Cox in 2016.

She was killed outside a library in Birstall, West Yorkshire, where she was due to hold a constituency surgery.

The investigation into the attack will be led by the Metropolitan Police’s specialist Counter Terrorism Command, who will determine whether it was a terrorist incident.

A government source told the BBC the man arrested was a British national who, according to initial inquiries, is of Somali heritage.

The prime minister said Sir David had an “outstanding record of passing laws to help the most vulnerable”.

“David was a man who believed passionately in this country and in its future. We’ve lost today a fine public servant and a much-loved friend and colleague,” said Mr Johnson.

Ms Patel said the killing “represents a senseless attack on democracy itself”, adding that “questions are rightly being asked about the safety of our country’s elected representatives”.

Speaker of the House of Commons Sir Lindsay Hoyle, who spoke to the home secretary on Friday, also said MPs’ security would have to be examined. He said Sir David’s death would “send shockwaves across the parliamentary community and the whole country”.

He told BBC Two’s Newsnight that police were contacting all MPs to check on their safety and reassure them.

Sir Lindsay said he went ahead with his constituency surgery as normal on Friday evening and said it was essential that MPs were able to retain their relationship with their constituents.

“We have got to make sure that democracy survives this,” he said.

Sir David, who represented Southend West, was holding a constituency surgery – where voters can meet their MP and discuss concerns – at Belfairs Methodist Church in Eastwood Road North.

Essex Police Chief Constable BJ Harrington said they had received reports of a stabbing shortly after 12:05 BST and within minutes, officers had found Sir David with multiple injuries.

Police and paramedics “worked extremely hard” to save him but he died at the scene, Mr Harrington said.

Police have appealed for anyone who saw the attack, or who has footage from CCTV, dash cams or video doorbell to contact them.

Southend councillor John Lamb told the BBC that Sir David moved his surgeries to different locations around the constituency “to meet the people” and said the attack was “absolutely dreadful”.

“We’ve lost a very good, hard working constituency MP who worked for everyone,” he said.