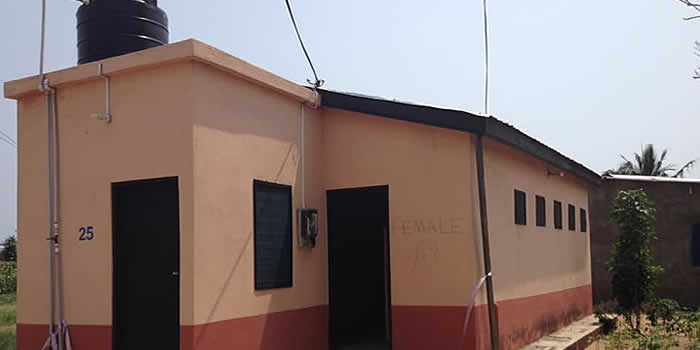 There is a simmering tension between the Catholic Church and the Akyem Asiakwa Community in the Eastern Region over the Construction of a Public Toilet facility.

The Church has through a Court Order stopped the Community from continuing with the construction of a Modern Public Toilet facility which has reached the lentil stage claiming it will emit a repugnant smell to disturb the quality of air around the Church building due to its proximity.

The Church again is claiming ownership of the said land.

But the Community, however, contends that the land on which the facility was being put up is a buffer zone lying along the Asiakwa to Bunso Road which the Community already had an old toilet facility located on.

Apart from the Public toilet facility, the Church is also ejecting over 20 traders who operate shops and sell along the road in front of the Church building in the Asiakwa Community heightening the tension.

Starr News has cited judgement dated August 13, 2019 entered in favour of the plaintiff herein – the Registered Trustees of the Catholic Church Diocese of Koforidua against the defendants -Frank Owusu Aboagye, Yaw Aniaji (both Assembly Members and Amankrado Nana Okyire Gyawu II from the Koforidua High Court presided over by Her Ladyship Justice Cecilia N.S Davis(Mrs) after the defendants failed to appear in court that” the defendants, their agents,workmen and all persons claiming any interest in the land are perpetually restrained from entering the said land.”

“It further adjudged and order that the defendant shall remove and carry away the debris of the Structure they have erected on the said land in dispute within 30 days from the date of this judgement .If the defendants fail to remove the structure within the time stipulated herein,the plaintiff shall clear away the said defendants structure and the debris and surcharge the defendants with the cost of the exercise and plus cost of Ghc25,000 together with other cost granted totalling Ghc28, 000.”

Adding that “beside the Church, there are schools including a Kindergarten also on the Land yet the respondents make loud noise which can be head at long distant away to disturb Church Service as well as classroom teaching”

The Car of the Amankrado of Asiakwa has been impounded for auction to pay the judgement debt awarded by the Court against the community after it failed to comply with the ruling.

Speaking to Starr News on Friday the affected residents mostly the traders called on the Member of Parliament for the Area, Hon.Atta Akyea to intervene arguing that they have been operating on the land for decades given that is a buffer zone.

According to the traders their sources of livelihood would be affected should they be ejected.

“We are appealing to the Hon.Atta Akyea to intervene .we have been operating here for many years.This is our sources of livelihood.We are telling them if we are ejected here we are not going to vote we are all NPP Members. We have also petition Okyenhene to intervene so we are also appealing to Osagyefo to come into the impasse.”

Some of the aggrieved traders accused the Catholic Church of preaching virtues but practicing vices by being insensitive to the plight of the poor by bullying them through the Court because they had no money for legal representation.

Other communities members also lamented that demolishing of the new toilet facility under construction would have dire consequences on sanitation in the community.