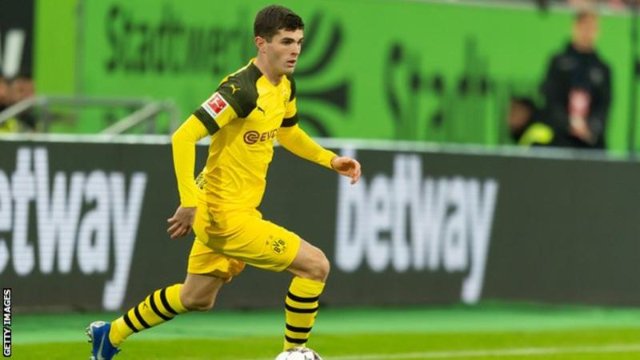 Chelsea have signed Borussia Dortmund forward Christian Pulisic for 64m euros (£58m), but will loan him back to the German club until the end of the season.

The 20-year-old United States international, who was linked with Liverpool and Arsenal, joined Dortmund as a youth player in 2015.

Pulisic has scored nine goals in 23 games for the US.

“It’s a privilege to have signed for such a legendary club,” he said.

It is the highest transfer fee for an American player, beating the 20m euros Wolfsburg paid for John Brooks in 2017.

Dortmund director Michael Zorc said: “It was always Christian’s dream to play in the Premier League.

“That certainly has to do with his American background, and as a result we were unable to extend his contract.

“Against this background, we have decided to accept an extremely lucrative bid by Chelsea, given the low contract maturity.”

Pulisic’s contract at Dortmund was due to expire in June 2020.