A bribery allegation in which the Chief Justice, Kwasi Anin-Yeboah (JSC) has been mentioned is now to be investigated by the Criminal Investigations Department (CID) of the Ghana Police Service.

Details are scanty with regards to the expectation of the CID looking into the matter but a letter from the Judicial Secretary of the Supreme Court, dated Monday, July 12, has invited the Director-General of the CID to probe.

The said allegation which mentions the Chief Justice stems from a tussle between Ogyeedom Obranu Kwesi Atta VI, chief of the Effutu and Gomoa Ajumako Traditional Area and the private legal practitioner, Akwasi Afrifa.

A petition made to the General Legal Council (GLC) by Kwesi Atta VI on March 1 this year titled, “Petition Against Lawyer Akwasi Afrifa”, alleged that the private legal practitioner owed the chief $75,000 that the lawyer had refused to pay.

The chief’s petition reported that he was a plaintiff in a civil suit against the Ghana Telecommunications Co. Limited.

The petition said Kwesi Atta VI contracted the services of the lawyer at a cost of GH₵300,000 so that Afrifa would represent the chief at the Court of Appeal in Cape Coast as well as at the Supreme Court in Accra.

Afrifa is then alleged by the petitioner to have asked for $100,000 to “do some ways and means (gymnastics)” in order to secure a desirable ruling for the plaintiff. One can infer from context that “ways and means” referred to tampering with the justice system. 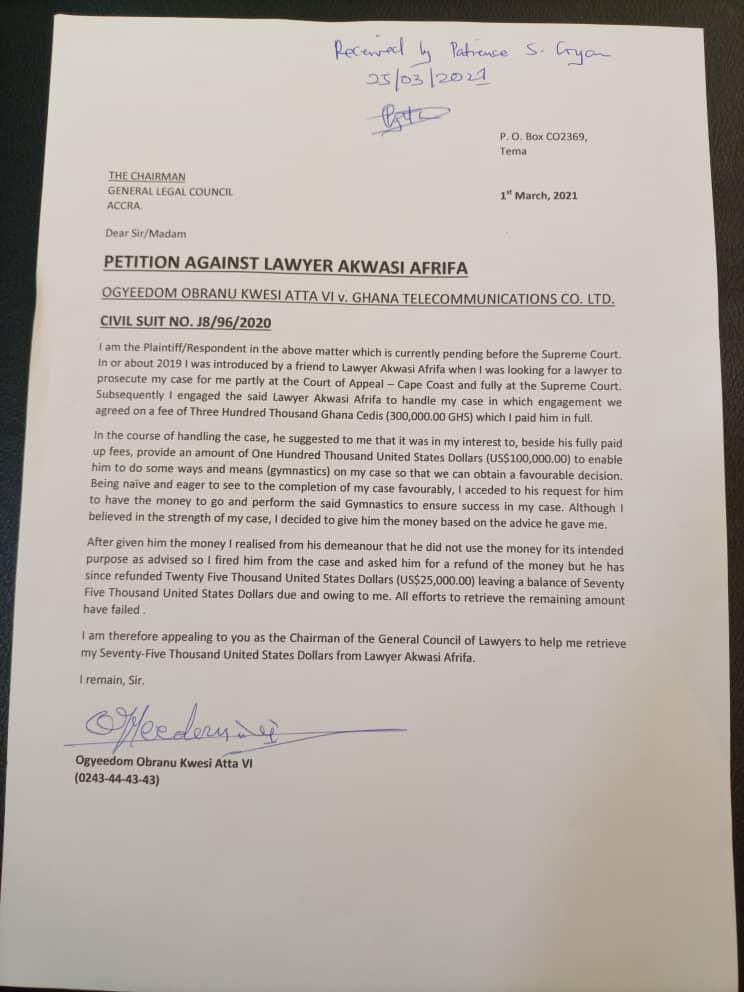 Kwesi Atta VI alleged that he paid the said $100,000 to Afrifa. However, due to Afrifa’s “demeanour”, the chief claims he realised the lawyer did not use the amount for what was promised. As such, he asked for his money back from the legal practitioner.

According to the petition, only $25,000 has been repaid by Afrifa to the chief. The GLC was then petitioned to help retrieve the remainder.

Afrifa’s response was publicised on social media to a huge furore on Thursday, July 8. The brouhaha continued throughout the weekend that followed.

In it, the private legal practitioner challenged the chief’s claim that GH₵300,000 was the amount that was agreed upon for the performance of Afrifa’s lawyerly duties. Instead, Afrifa claimed what was agreed had been GH₵ 1 million but the chief paid only GH₵300,000 at the beginning.

What was paid by the chief, according to Afrifa, was then equated to an exchange rate of $50,000 by both men.

Afrifa’s response further stated that Kwesi Atta VI later re-approached him to refund part of the money because he [Kwesi Atta VI] had contacted friends who could convince the Chief Justice to help bring the court ruling into the chief’s favour, for a fee of $5 million.

Having been told that the Chief Justice was requesting a bribe of $5 million, Afrifa alleges that he promised to give back not part but all of the GH₵300,000 ($50,000) that Kwesi Atta VI had paid.

The allegations contained in Afrifa’s response, particularly on the unsubstantiated claim of the Chief Justice allegedly requesting a bribe of Kwesi Atta VI, has sent many tongues wagging.

Meanwhile, Kwesi Atta VI has denied that he ever contacted friends through whom the Chief Justice requested a bribe of $5 million.

In a rejoinder that was published on different platforms on Sunday, July 11, the chief said he “unequivocally” denies “all allegations of intended bribery or actual bribery against any judge including the Chief Justice whom I have never met or known personally apart from seeing him in distance from the bench”.

Meanwhile, a statement signed by the Judicial Secretary of the Supreme Court, Justice Pamela Addo has regretted the incidence of the Chief Justice’s name in the public spat between Afrifa and Kwesi Atta VI.

The statement read: “His Lordship is saddened that without any shred of evidence, his name has been dragged into this sordid and potentially criminal matter”.

The Judicial Secretary’s statement also informed that “[t]o ensure that this matter is fully investigated, His Lordship has directed that a formal complaint be made to the Criminal Investigations Department of the Ghana Police Service for investigations and any necessary action”.