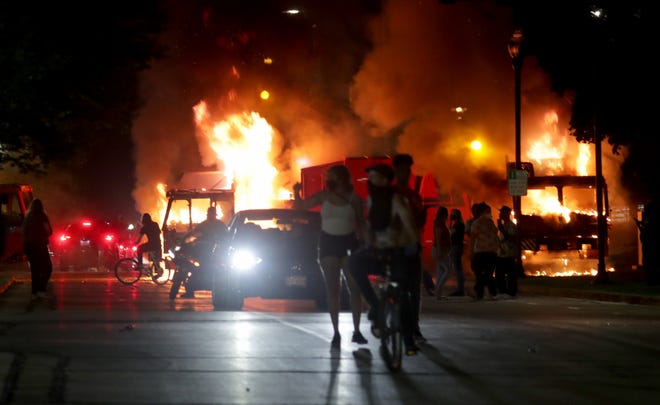 There have been clashes for a second night in Wisconsin, with buildings and cars set alight, following the police shooting of a black man on Sunday.

Jacob Blake, 29, is in a stable condition after he was shot several times as he went to a car and opened its door in the city of Kenosha.

Governor Tony Evers has called up the National Guard to aid local police.

The killing of black man George Floyd in Minnesota in May led to protests against racism and police brutality.

Demonstrations across the US and in many cities internationally put a spotlight on the treatment of African-Americans by US law enforcement and prompted a wider reflection on racism in society.

Video footage of the Kenosha shooting, taken from across the street and shared on social media, shows Mr Blake leaning into the car and an officer grabbing his shirt, with seven shots heard.

What’s the latest on the streets?

It had started out as an evening reminiscent of so many in towns and cities across the US after the killing of George Floyd, with hundreds of young people in Kenosha breaking a curfew to confront police lined up outside the courthouse.

The demonstrators, here this time to call for justice for Jacob Blake, were initially pushed back and dispersed with strong tear gas and the use of sound bombs, but kept returning.

Even now in the early hours of the morning they still face the officers in their riot shields. “We’re not leaving”, they chant.

In the surrounding streets we saw vehicles set on fire, buildings vandalised and whole rows of streetlights pulled down.

“It is a breath of fresh air,” one young protester told me. “I am tired of being scared of the police killing me. Tonight they are going to listen.”

What is the police and government response?

In a press release, Governor Evers said the “limited mobilisation” of the National Guard – made at the request of local officials – was to help law enforcement “protect critical infrastructure” and make sure people could demonstrate safely.

He said he was deploying 125 members of the National Guard on Monday night.

Earlier in the day some protesters tried to force their way into Kenosha’s public safety building, demanding that the officers involved in the shooting be arrested. A door was broken off its hinges before officers in riot gear used pepper spray to disperse the crowd.

Hundreds of people had also marched on police headquarters on Sunday night to demonstrate against the shooting.

Governor Evers has condemned the shooting, saying Mr Blake was “not the first black man or person to have been shot or injured or mercilessly killed at the hands of individuals in law enforcement in our state or our country.”

But the Democratic governor has faced criticism for this response.

Mr Evers has also said there will be a special session of the state legislature on 31 August to discuss a package of laws announced earlier this year on accountability and transparency of the police following the police killing of George Floyd.

Lawmakers had “failed to act” in the two months since he announced the “commonsense policies”, the governor tweeted.

What do we know about the shooting?

Kenosha Police Department said the “officer involved shooting” happened shortly after 17:00 on Sunday. It added that officers had provided “immediate aid” to Mr Blake, who was taken to a hospital in Milwaukee in serious condition.

The person who shot the video, Raysean White, said that before he began taking it, he saw police wrestle with Mr Blake. He said police punched and Tasered Mr Blake.

“Jacob kind of leaned on the car and they proceeded to wrestle him toward the back of the car and he went to the other side,” Mr White told CNN.

It was then he started recording. Mr Blake is shown walking around the front of the SUV. The two officers closest to Mr Blake at this point on the video are white males.

As he opens the door and leans into the car, one officer can be seen grabbing his shirt and opening fire. Seven shots can be heard in the video, as witnesses shout and scream.

The police said officers had been responding to a “domestic incident” but gave no details about what led to the shooting. They have not said how many officers were involved and no names have been given.

Police in Kenosha do not have body cameras, although they do have microphones.

Mr Blake’s partner, Laquisha Booker, told a local NBC channel that the couple’s three children were in the back of the vehicle at the time and saw the shooting.

Civil rights lawyer Ben Crump, who represents the families of George Floyd and others pursuing actions against the police, has announced he is representing Mr Blake’s family.

In a statement released on Twitter he said the 29-year-old father “was helping to de-escalate a domestic incident” at the time.

Mr Crump said the officers’ “irresponsible, reckless and inhumane actions nearly cost the life of a man who was simply trying to do the right thing”.

Mr Blake, who works as a security guard, is now out of surgery and improving.

Wisconsin’s Department of Justice is investigating the incident in Kenosha, a city of about 100,000 on the south-western shore of Lake Michigan.

The officers involved have been placed on administrative leave and a petition calling for them to be charged has garnered tens of thousands of signatures.

The Kenosha County district attorney said his office would work as quickly as possible but “these kinds of huge decisions… are not decisions that can be made in haste”.

Democratic presidential nominee Joe Biden on Monday released a statement calling for a “full and transparent investigation” of the shooting.