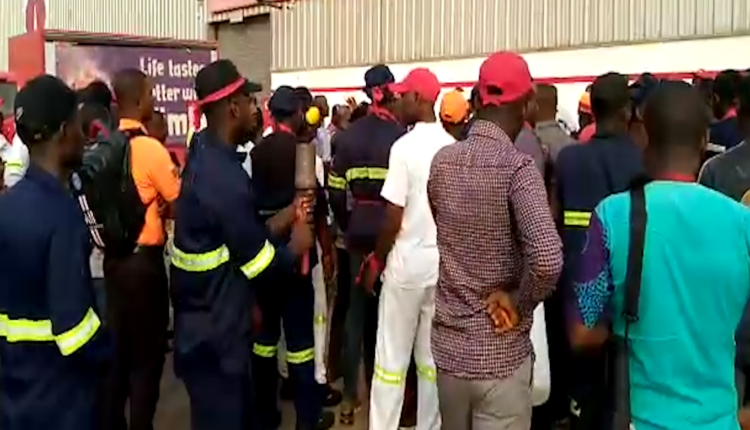 Coca-Cola Ghana to lay off workers

Workers of Coca-Cola Bottling Company of Ghana will soon be laid off as the company struggles to stand on its feet in the wake of the coronavirus outbreak.

He made reference to the company’s collective bargaining agreement to announce the incentives for those who will no longer have jobs with the company.

“In accordance with Section 65 (2), all affected employees shall receive a ‘redundancy policy’ and in lieu of notice, a payment shall be made for the notice period, where necessary.

“The leadership of the respective Trade Unions, ICU and UNICOF, have in accordance with law been notified and management will be with them to discuss the terms and conditions of the severance,” excerpts of the memo read.

According to the company, once it receives feedback from the labour unions, the affected workers will be communicated to by their line managers.

In the meantime, management said it expects all staff to continue to carry out their obligations in accordance with the existing collective agreement and labour Act 2003 until the effective date of termination.

The novel virus has caused a drastic change in most sectors of the economy since Ghana recorded its first case on March 12, this year.

The devastating impact of COVID-19 is profoundly being felt in the pockets of Ghanaians with as many as 500,000 jobs lost.

The Trades Union Congress (TUC) estimates 100,000 lost jobs in the formal sector and 400,000 being wiped off in the informal sector after an evaluation of the market.

“Only 4.0% of firms indicate that they have laid-off workers, corresponding to 1.4% of the workforce (an estimated 41,952 workers).

A study by the African Union (AU) recently estimated up to 20 million jobs at risk due to the coronavirus.

The African Development Bank had projected GDP growth of 3.4% before the outbreak, but AU economists have predicted a 0.8% drop.

Elsewhere, The Guardian reported in May that the number of workers who lost their jobs in the US soared to more than 40 million as the number of unemployment claims continued to rise, with 2.1 million people filing for unemployment.

This was mainly attributed to widespread shutdowns and stay-at-home orders in an effort to halt the spread of the deadly pandemic.

The Department of Labour estimated more than 20 million Americans losing their jobs in April, bringing the unemployment rate to 14.7%, up from 4.4% in March.

In Europe, about 397,000 lost their jobs in April alone, according to data from the EU’s stats agency, released in June.

Euronews reported that the EU’s jobless rate rose to 6.6% in April, from a 12-year low of 6.4% the previous month, according to Eurostat.

Most governments resorted to furlough schemes to mitigate the impact of the coronavirus.

The furlough system puts workers on temporary leave and the government pays a percentage of their salaries.

In the UK, for example, British Petroleum announced 10,000 job cuts on June 8.

Swissport announced that 4,556 jobs could be affected, while British Air raised fears about the inability to keep up to 12,000 employees.