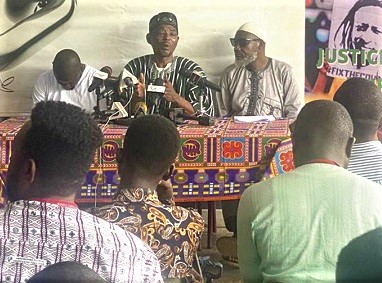 The families of victims of the shooting incident that occurred in Ejura in the Ashanti Region last year have entreated the government to expedite action on the payment of compensation to the three persons who were injured in the disturbances.

They have also urged the Attorney-General to speed up the prosecution of suspects in the murder trial of the two young men who lost their lives in the incident  Abdul Nasir Yussif and Murtala Suraj Mohammed.

Addressing a news conference in Accra yesterday, the Chairperson of the Joint Committee of the Victims of the Ejura Incidents, Alhaji Inusah Bawah, said “till date, none of the injured persons has received compensation”.

He said after submitting all the required medical documents needed to effect the payment, they had so far not received any acknowledgement indicating receipt of the documents.

“Our lawyers also wrote to them on two separate occasions and, as it stands now, we have still not received reply to any of the letters the lawyers have issued,” Alhaji Bawah added.

On the issue of prosecution, he said despite persistent calls on the police and the authorities involved, persons responsible for the alleged murder of Yussif and Mohammed were still walking free.

“Our attempts to meet the IGP have all been ignored and we are terribly disappointed by the continuing disinterest in prosecuting those individuals,” he added.

For his part, Kaaka’s cousin, Nafiu Mohammed, who is also a member of the joint committee, said since Kaaka’s death and the subsequent arrest of his brother, the family had been crying for justice.

“What kind of justice system is this? When is enough, enough? This must stop!

“This victimisation must stop; we are nothing but a poor family; enough is enough!” he added.

On June 29, 2021, Yussif and Mohammed died from gunshots from a joint police and military team during activities related to the burial of a social activist in the area, Ibrahim Muhammed, popularly known as Kaaka.

Three other persons  Louis Ayikpa, Awal Misbau and Nasif Nuhu got injured in the incident.
A committee set up by the Minister for the Interior to investigate the issue submitted its report in September last year.

The committee, chaired by a Justice of the Court of Appeal, Justice Kingsley Koomson, in its report, recommended that families of the two young men who lost their lives in the shooting incident must be compensated.

It further recommended that the three injured persons must also be compensated.

While the government had since compensated the families of the two young men who lost their lives in the shooting incident, the injured persons are yet to be compensated.