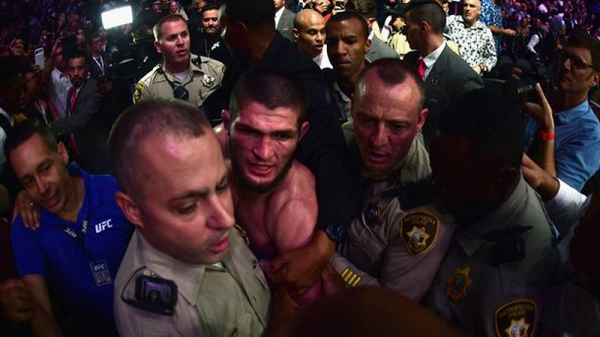 Seconds after landing a fourth-round submission, the Russian vaulted the cage and headed towards Irishman McGregor’s team, prompting a melee.

Meanwhile, McGregor was involved in a bust-up in the octagon with members of his opponent’s team.

Three of Nurmagomedov’s party were arrested but later released.

Earlier White could be heard telling the 30-year-old winner he could not receive his belt in the octagon as he feared it may incite trouble among those present at Las Vegas’ T-Mobile Arena.

He later said the Nevada State Commission, which sanctioned the bout, has withheld Nurmagomedov’s fight payment pending an investigation.

“I know if we put the belt on him [Nurmagomedov] in the octagon there’ll be things thrown,” said White. “I just said let’s just try and get him out of here.

McGregor appeared stunned and was quickly escorted away by his team, while heavyweight and light-heavyweight champion Daniel Cormier entered the octagon to seemingly try to calm Nurmagomedov, who left the arena flanked by police.

What was billed as the biggest bout in UFC history, one set to break the organisation’s pay-per-view record and where McGregor returned after a 693-day absence, will now prompt difficult questions for White and the company.