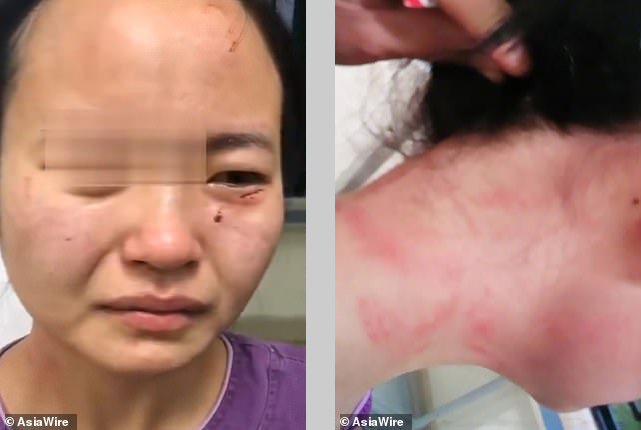 A 47-year-old Nigerian coronavirus patient has been detained for allegedly attacking and biting a Chinese nurse in a bid to avoid quarantine.

Dailymail reported that Okonkwonwoye Chika Patrick, savagely beat up a nurse for preventing him from leaving his quarantine ward at the Guangzhou Eighth People’s Hospital on Wednesday.

The nurse whose name was given as Wang, in a video, burst into tears as her swollen face is covered with bruises and lacerations.

He tested positive for coronavirus after arriving in Guangzhou city of Southern China on March 20 and was admitted to the Hospital on March 23.

Recounting how it happened, Ms Wang said she asked the patient to take a blood test on April 1, but the patient refused and attempted to walk out of the ward.

The police, in a statement said, Ms Wang was subsequently pushed to the ground and bitten on the face when she tried to stop the Nigerian citizen from leaving the hospital.

Ms Wang is said to have suffered multiple injuries to her face, neck and waist.

Mr Okonkwonwoye has since been detained at the treatment centre and will be prosecuted according to the Chinese laws after recovery, the Guangzhou police has said.

The Guangzhou police said they had been investigating the incident and would ‘‘immediately carry out prosecution once the treatment is finished.’’

“At the moment, the patient still tests positive,” the police statement read. “The hospital has strengthened its security measures in the internal isolation zone.

“The police would like to stress again that all inbound travellers should strictly comply with the relevant laws and anti-virus regulations in China,” the statement continued.

Meanwhile, UK’s Crown Prosecution Service has said assaults against emergency workers were punishable by up to two years in prison.

The Service has said that people who internationally cough in a threatening manner towards other workers or members of the public could be charged with common assault.